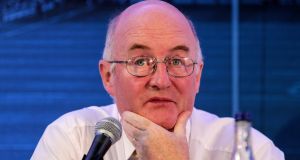 GAA president John Horan said that he had been surprised that the association had moved so quickly on a Tier 2 football championship.

Speaking after Saturday’s special congress in Páirc Uí Chaoimh had green-lighted the proposal, to be contested by the counties in the lower half of the league, which he had championed, Horan said the impetus had come from two Division 4 counties.

“It started with Wicklow and Leitrim [now promoted to Division 3] coming to me asking could they get it on the clár at Central Council. It took on its own momentum. I was actually quite surprised it reached this stage so soon. I’m glad for them that they are getting something that they wanted.”

He responded to concerns that the new competition would receive no greater exposure than previous versions down through the years – a topic that arose in a number of the contributions to the debate, on both sides.

“We are going to have to work on it, aren’t we? Do you know what I mean? We have been talking to RTÉ in terms of the coverage for it. We hope to have the semi-finals and finals at Croke Park to give it that profile.

“I’m listening to what people are saying on the floor. Hopefully if the Tier 2 gets that momentum the Joe McDonagh and others will. It is something I think we need to be conscious of when we renegotiate our TV deals into the future,”

He also explained his thinking in bringing the proposal to congress at a time when the Fixtures Calendar Review task force is finalising its report – elements of which were leaked over the weekend, something that the president described as “disappointing”.

He said that the proposals of the task force could supersede the new Tier 2 championship and also pointed out that even if the task force proposals are accepted by next February’s annual congress, they wouldn’t be implemented until 2021.

“It could in time [supersede the new championship] but none of that will be implementable until 2021. The Leitrims and Wicklows asked for this to push on, not to be waiting and holding back in anticipation of something else happening. That is why we are where we are today.”

Asked about the suggestion from the floor of the debate that the final of the Tier 2 championship take place on the same day as the senior All-Ireland final instead of the traditional minor curtain raiser, he expressed interest but repeated his top-table assurance during the debate that such an initiative had not been part of the proposal.

“That’s a discussion that needs to happen. It wasn’t one on the table today so it was a bit of a red herring. One of the reasons not pushing it out to All-Ireland final day is the impact it would have on the club.”

On the subject of the playing rules changes, agreed in summary fashion after the Tier 2 proposal had been accepted, he admitted that he had expected there to be more discussion, particularly on the advance mark, allowing players a free kick if they catch a kicked pass of at least 20-metres distance within the opposition 45.

“I thought the debate on that would have been far more comprehensive, probably a little more divisive than it actually was. You saw the level of debate. We are where we are. That’s the democracy we have, that’s what we produce. So we have to move on.”

The president also took issue with suggestions that another of the rule changes, the introduction of the sin bin for black-card infractions instead of substitution for the rest of the match, would be a serious burden for referees at club level, saying that the women’s game had reported no such difficulties.

“Helen O’Rourke [CEO, Cumann Peil na mBan], who sits on our management committee now said that this has been ongoing for a considerable while – the use of the sin bin – and it hasn’t been an issue.

“I’ve talked to a few referees and they don’t see it as a major difficulty. I think sometimes referees might be hesitant in using the black card and the fact that the fella’s only going for 10 minutes rather than being excluded for the rest of the game actually will allow a greater application.

“I’ll be honest with you: the day I actually lost a little bit of faith in the black card was when Dean Rock got a card and Bernard Brogan walked out and played in his place and you’re saying, where’s the sanction in that? – whereas the stats from the sanction of the sin bin during its trial period was 2.9 points scored by the team up a man against one score for the team down a man.

“It actually hurt one or two teams in the league if you go and look at it. The discipline factor actually cost them.”

1 Coming fourth in the Olympics didn’t change this fearless quartet, time did
2 Gerry Thornley: Home and away Six Nations could be its ruination
3 Liverpool among clubs to argue against paying €384m TV rebate
4 Sports nerd heaven: Irish elite logging on for Analytica Zoom part two
5 Decision expected next week on staging of College Football game in August
Real news has value SUBSCRIBE