Dublin to open Leinster campaign in Tullamore against Westmeath 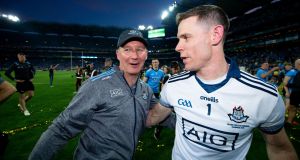 Jim Gavin and Stephen Cluxton celebrate Dublin’s victory over Kerry which clinched the five in a row in September. Photo: Tom Honan

Holders Dublin are set for a novel trip to Tullamore for the opening round of next year’s Leinster football championship.

Leinster Council chiefs have pencilled in the home of Offaly GAA for Dublin’s provincial quarter-final clash with Westmeath. That game will take place on May 23rd/24th and will be Dublin’s first outing there since the decision was taken to move away from Croke Park for summer openers.

Dublin beat Laois at Kilkenny’s Nowlan Park in 2016 and began the Leinster championship in Portlaoise for each of the last three summers, overcoming Carlow, Wicklow and Louth.

“Our policy for the last number of years is that other than Croke Park, we have identified Nowlan Park, Portlaoise, Tullamore and Wexford Park, should Wexford draw them, as suitable venues,” said Leinster Council chairman Jim Bolger. “That’s the policy and every county knew before the draw what the policy was.

“From a risk management perspective we have to be happy that the venue will be suitable for the potential crowd that we expect and we feel in this instance that Tullamore is the right place for it, in light of that policy regarding the four venues outside of Croke Park.”

Tullamore has a capacity of around 18,500 and is also seen as a short distance for Westmeath supporters to travel with just over 30 kms between Offaly’s principal town and Mullingar.

“There’s an element of unpredictability there too,” said Bolger. “Dublin are going for a six-in-a-row of All-Ireland titles next year. You don’t know what sort of a new following they’ll have once they start that journey. So there is an element of unpredictability about what crowd they’ll have there but we’re still confident that Tullamore will give the patrons comfort.”

Kildare’s Kevin Feely hit out at the timing of the competition with the Lillies scheduled to play Longford on Saturday week and Wicklow seven days later.

“We put it to our council members last year and they went back to the counties and coming out of that was that they were very conscious of having the New Year free and that the only way we could do it and have it played before the National League was to go back to December,” said Bolger.