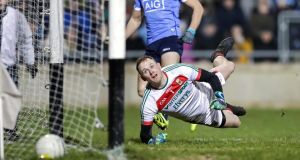 If ever you saw a four-point hiding, this was it. Dublin stretched their record against Mayo under Jim Gavin to 10 wins from 13 games and at no stage did any other outcome look likely. They bounced out to an early lead, kept an understrength Mayo at arm’s length all the way and headed back east with scarcely a bead of sweat expended. They could afford to only score 1-1 in the second half and never be close to concerned it wouldn’t get the job done.

When they come to write the books on the Dublin-Mayo rivalry, this one won’t waste much paper. Lee Keegan returned for Mayo, Diarmuid Connolly came off the bench for Dublin. Mick Fitzsimons saw a straight red card late on for a late studs-up tackle on Aidan O’Shea but otherwise there was very little to report.

Both teams pretty much downed tools after Niall Scully punched Dublin into a 2-9 to 0-8 lead 10 minutes after half-time. Neither side scored from play from there to the end of the game - one team didn’t have to, the other didn’t have it in them. It was turgid stuff.

Dublin got their business done quickly. Mayo’s propensity for conceding early goals against Dublin was part of their undoing here again, this time with Paul Mannion roofing his early chance even before the tannoy man had a chance to let us in on the four Dublin changes. Mannion was ravenous all night but especially so here, latching onto a lovely John Small pass after 70 seconds and leaving Eoin O’Donoghue in his vapours before planting his shot above Rob Hennelly. The clock had barely ticked a minute.

This has become a fairly chronic habit for Mayo in matches against Dublin. That’s four out of their past five games against Jim Gavin’s side where they have conceded a goal inside the opening 10 minutes. On three of those occasions, the goal was the first Dublin score of the game. It’s not like the gradient isn’t steep enough already.

Dublin are adept at any amount of things but maybe their greatest asset - if only because they get to practice it so much - is tick-tocking scores to keep a lead intact. Mayo had plenty of the play from that point on but they were never able put together two scores in a row. They hit seven points in the first half - for five of them, Dublin replied with a score in the very next attack.

Dean Rock looked sharp, Brian Fenton was in his usual lordly form, Mannion was a class apart any time he got on the ball. For Mayo, only Kevin McLoughlin ever really looked at it - his two first half points allied to some Jason Doherty frees were enough to keep Mayo some way relevant. They went into the break 1-9 to 0-7 behind.

If they were going to make a game of it, they had to do the damage straight away after the break. And they had their chances - Adam Gallagher was put in on goal by Doherty almost immediately but his attempt at a curled finish didn’t threaten Stephen Cluxton’s left-hand post. Keegan, Stephen Coen and Doherty all missed good chances in the third quarter, just when Dublin were listing ever so slightly. That was the time to make them pay but Mayo couldn’t get it done.

Instead, Scully tipped home a lofted Rock pass to put the tin lid on it. That was game-set-match with still a good 25 minutes to go. Mayo toiled away but couldn’t shoot. Three different players missed frees for them - Cillian O’Connor can’t get back quickly enough.

In the end, Conor Loftus came off the bench to pop three injury-time frees and put a respectable face on the scoreboard. They got out of it with a four-point defeat but it was far more comprehensive than that.

Proposals for an annual Club World Cup seem fanciful at best 21:00
Liverpool reverse decision to use government furlough scheme 19:43
McLaren boss warns coronavirus impact could threaten Formula One 18:45
New PGA Tour schedule could bring an end to the year like no other 18:42
Jones says new players will form 60 per cent of England’s next World Cup squad 18:30
Crossword Get access to over 6,000 interactive crosswords