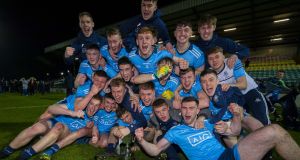 Reigning Under-20 Player of the Year Ciaran Archer returned to haunt Laois as Dublin secured back to back EirGrid Leinster titles at the O’Moore County’s expense on Friday night.

Prolific Archer blasted 3-8 against Laois in last year’s decider and led the scoring again with 0-7 in front of around 2,000 in Carlow.

Kieran McKeon impressed too with 0-4 as Dublin took the lead midway through the first-half and never looked back, Lorcan O’Dell claiming the Man of the Match award.

They’ll meet the Ulster champions - ither Donegal or Tyrone who meet on Saturday - in an All-Ireland semi-final at Croke Park on March 17th.

It’s Dublin’s third 10-point win of the campaign while they defeated Meath in the provincial semi-finals by 13 points.

Laois were hammered 4-18 to 0-17 in last year’s final but retained seven starters from that game in their line-up, including captain Ronan Coffey and senior duo Mark Barry and Sean O’Flynn.

Barry and O’Flynn both featured for Laois in last weekend’s Allianz League loss to Kildare and, initially, it looked as if the 4-1 underdogs might capitalise on their relative experience.

They led 0-3 to 0-0 after just four minutes with Coffey and goalkeeper Matthew Byron converting those scores from placed balls as they probed forward and drew frees.

Dublin were back level by the 11th minute at 0-3 apiece thanks partly to two eye-catching scores from Lee Gannon.

The sides were level again at 0-4 apiece but seven Dublin points without reply between the 15th and 27th minutes put daylight between the teams.

Archer was to the fore in that period with three points from frees while Mark Lavin and Sean Foran, who both came on as subs for Dublin in last year’s final, pointed too.

Archer closed out the first-half scoring with a converted 45 to leave Dublin in pole position at half-time, up by 0-11 to 0-5.

They could have been further ahead as McKeon drew a fine save from Byron, son of ex-Laois All-Star goalkeeper Fergal, and Alan Murphy also struck a shot off the bar.

Coffey narrowed the gap to just five points after the restart with a Laois point but that was as good as it got for them.

McKeon was terrific in the second-half for Dublin with all of his points in that period.

Laois trailed by seven points with four minutes to go when they were awarded a penalty but Barry pulled his kick wide.

Andy Murray to return to action on June 23rd 09:18
Cricket Australia boss casts doubt over ‘high risk’ T20 World Cup 08:41
Boston Marathon cancelled for the first time in 124-year history 08:00
Premier League to restart on June 17th, Andy Farrell on lifting the Monday blues 07:43
Anfield and Cheltenham show sports again lacking in looking after their own 07:00
Crossword Get access to over 6,000 interactive crosswords