Donegal take step back before moving forward against Derry 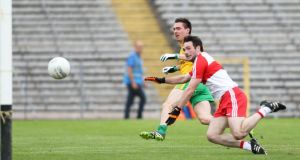 Clones on a Saturday night. If it ain’t quite the pits, it sure ain’t The Ritz. As Ulster semi-finals go, this fell somewhere in between.

Donegal weren’t the electric light orchestra that had left Armagh in a tizzy a fortnight before, Derry hadn’t the gumption or nous to make them pay for it. In the end, a Martin O’Reilly goal 10 minutes into the second half bought Donegal more rope than Derry were able to pull back. It was enough.

Though it put them through to their fifth Ulster final in a row, afterwards Donegal bore the look of chefs who could only just about stand over what they’d sent out to the diners. This was bitty and error-ridden stuff, never remotely reaching the heights of the Armagh game.

And had they come up against a team with more – or better – leaders than Derry, they could have been asked questions late on and maybe struggled for answers. They knew it too.

“We’ve to improve massively in a lot of areas of the field,” said Michael Murphy. “There were a lot of silly mistakes, a lot of handling errors. A lot of wide balls. But as regards complacency, that was never an issue. There was a lot of silly chat out there [after Armagh]. We go after performances.

“We don’t listen to the chat that goes on outside. It does go on, to be fair. But it doesn’t seep in. Never has over the last five or six years.

“That’s one of the main reasons we’re able to keep a level-headed position. Over the next three weeks it won’t affect us again.”

It would be stretching matters to say Donegal were ever in real danger. But they were, if you like, in danger of being in real danger a couple of times. 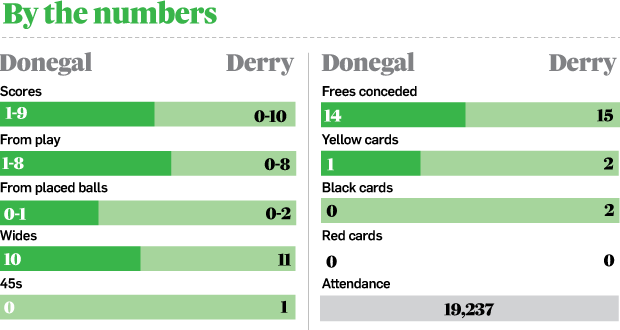 They were never behind in the game but they could have given up a goal after 40 seconds, only for Paul Durcan to smother a shot from Enda Lynn.

They were five points up with 25 minutes to go after O’Reilly’s goal but Derry twice cut the gap to two and only for careless shooting would have cut it further. Little wonder that Brian McIver left Clones with a head full of regrets.

“We had enough chances, but didn’t take them whenever we were on top. That wee spell they got whenever they got the goal and a couple of points gave them a wee bit of breathing space. But right to the end, we had chances. Disappointing to play so well and get nothing out of it.

It was an often curious display from Donegal, inside and outside the whitewash. Patrick McBrearty picked up an early injury but stayed on the pitch until injury-time at the end of the game. Repeated inquiries from the Donegal sideline were waved away despite his obvious discomfort.

It meant that for long spells in the game Donegal were playing with one man in the Derry half and that man couldn’t run more than five yards without a limp. Rory Gallagher said afterwards that it was a knee problem that McBrearty swore he could run off.

Depth In the end, Donegal didn’t even use all their subs. For all the potency of the first XV, Gallagher clearly doesn’t quite have the depth he’d like in his squad.

He does, all the same, have Michael Murphy and a resurgent Colm McFadden.

In a game of suffocating blankets, their ability to kick long-range points (two apiece) was crucial. As was the preternatural calm of probable man-of-the-match Neil Gallagher. The big midfielder was key to the Donegal goal. After the sides had gone in level at the break at 0-5 apiece, a couple of super Murphy and McFadden points loosened Donegal’s tie for them.

But it was the goal, set up by a gorgeously floated handpass from Gallagher to O’Reilly, that allowed them relax and open their top button.

Derry didn’t go away though. Cailean O’Boyle, Benny Herron and Ciarán McFaul all dug out decent scores to get them back within touching distance with five minutes to go. But too often they passed up shooting opportunities and, when it came to it, they didn’t have a Murphy or a McFadden to do what had to be done.

1 Gordon D’Arcy: Change has to happen before Ireland's trip to Paris
2 Kevin Seaward: ‘The first time I wore the Vaporflys, I hated them’
3 Out of Bounds: Patrick Reed helping make the ‘C’ word less taboo
4 Gerry Thornley: Wild reactions to this Ireland team as fickle as the wind
5 Seán Moran: Dublin and Galway make good starts in differing circumstances
Real news has value SUBSCRIBE