Despite youth and promise, Kerry remain reliant on David Moran 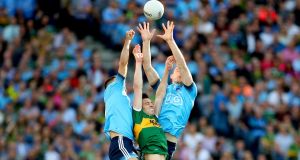 It is a consoling thought for Kerry football supporters that the best years are still ahead for their talented young team.

If that doesn’t underline the callow nature of the team then consider the following statistic: Kerry’s replay team had 270 championship appearances collectively; Dublin’s had 589.

Yet it mightn’t be as straightforward as simply waiting for success to arrive. What happens, for starters, when David Moran retires? Described by Darran O’Sullivan recently as the team’s de facto captain, the big Tralee man will be 32 next year and has overcome two cruciate knee ligament injuries.

“He didn’t play much in the league,” noted Moran’s father, eight-time All-Ireland winner Denis “Ogie” Moran. “I think if he played the whole National League, I don’t think his body would take it at this stage. You just have to try to keep fresh for the summer if you can, when you’re 30-plus it’s hard to keep at it the whole time because you’re trying to train and keep injury-free.”

“Ogie” Moran is optimistic about his son sticking about for 2020 at least, though naturally he can’t say for certain.

“Very few guys decide, ‘I’ll retire’,” he claimed. “So I think most guys, if they’re asked to be there on the Kerry team again next year, they’ll be there again. But injury is a big issue. It’s very hard if you’re carrying injuries; when you get to 30 and over, with the intensity of the training, it’s very hard to stay sound, very hard to train six or seven days a week.”

For all of Kerry’s burgeoning talent and promise, Moran still makes them tick. When he played so well in the drawn final, dominating the possession count in the vital middle sector, Kerry almost won.

His influence on the replay wasn’t nearly as great and Kerry lost. That’s not to draw a direct line between Moran’s performance and Kerry’s defeat, but the team clearly still relies on him.

It was Moran who Tommy Walsh was ready to hoist up into the air at the finale of the drawn game. It was speculated that Moran and Walsh hatched the crafty line-out plan on the spot, but it turns out it was pre-planned.

Walsh and Moran both travelled to Australia in the late 2000s, Walsh earning a contract with St Kilda and Moran missing out on one.

“Maybe that’s where the thought came from to do it,” said Moran the elder of a tactic that’s been seen in the AFL.

David will inevitably be tormented by his own role in the build-up to Eoin Murchan’s golden goal for Dublin seconds into the second-half last Saturday.

Despite being in a position to catch Conor Lane’s throw-up, he opted to punch the ball instead, directing it to Murchan, who went on to score one of the great final solo goals. Moran did get a hand to the Dubliner’s shoulder just before he struck at goal, though declined to pull him down.

Some Kerry fans complained about the amount of steps Murchan took before striking.

“I wouldn’t say there’d be any nitpicking about that, you’ve got to take it on the chin, haven’t you,” shrugged “Ogie” Moran.

The former Kerry great was inducted into the GAA Museum’s Hall of Fame this week, a nod to his silverware-laden career under Mick O’Dwyer.

“It’s far easier to play in them than watch them, I can tell you that, as a parent, it’s far easier to be out there playing in a final than watching one,” he said. “You’d be very disappointed for them when they lose, you’d feel every bit of their pain, because you know the journey they’ve been on, you know the sacrifices they’ve made and you just wish for it to fall well for them.”