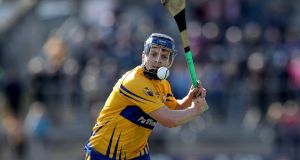 Clare player Podge Collins: “Cork are the form side, will be favourites. They gave us a nice trimming in the league down in Páirc Uí Rinn.” Photograph: Ryan Byrne/Inpho

Underachievement is not necessarily a dirty word, not when players like Podge Collins still have ample time and opportunity to readdress any imbalance.

Because at age 25 – and already with a senior All-Ireland, All Star, league and two All-Ireland under-21s – Collins is about to contest his first Munster hurling final. Indeed, Sunday marks Clare’s first final in nine years, and finds them looking for their first title since 1998, a lifetime ago as far as Collins is concerned.

“And playing senior the last five or six years, I never got close,” says Collins, gently stressing that sense of underachievement. “Not even a game where we lost by a point or two. We were well beaten, knocked out of Munster, so it is important for us to be back in a Munster final.

“And it [Sunday] definitely does hold a massive significance really. It’s gone so poor for us, over the years, and it’s something we are always trying to get ourselves up for. So it will be a massive occasion, one as players we always wanted to get to.”

Beating Limerick in the semi-final was also significant – Clare’s first win in Munster in four years, a sequence pre-dating the county’s 2013 All-Ireland: “It has been a long time coming, and it’s good to get the monkey off the back, because there was a lot of pressure on the players to get over the line, so job done.”

Collins can boast that partly ironic statistic of never losing a Munster final: he won the 2010 minor final with Clare, and also the 2012 and 2013 Munster under-21 finals (the same year they collected the All-Ireland); he did however attend the 2008 final, Clare’s last appearance, when they lost to Tipperary 2-12 to 0-19.

“In my own experience, we were lucky enough the ones we got to we won but I remember being in the terrace for that Clare-Tipp game, we were hockeyed, so our experience in Munster with Clare has been poor for as long as I remember. A lot of lads would have four Munster medals, from underage, but it’s different to senior.”

Cork may not put quite as much significance on Sunday, having won the 2014 Munster title, and contested the 2013 final but having seen them beat Tipperary and Waterford to get this far, Collins justifiably points to their own sense of destiny.

“Cork are the form side, will be favourites. They gave us a nice trimming in the league down in Páirc Uí Rinn, and I was very impressed with their puck-outs, Anthony Nash’s puck-outs were unbelievable that day. Two steps and bang it’s gone 80 yards into someone’s hand.

“And I got a feel for their younger lads that day, Mark Coleman and Shane Kingston, they were flying, they have brought in more than that now. I followed them through the league to see if they can continue that form, and they have really showed it in championship.

“We probably weren’t impressive in our semi-final, so we’ll be hoping to up our game. It was a good score line (3-17) and a lot of lads hit form, but we weren’t as fluid as we’d like to be, balls dropped and simple mistakes we’d like to rectify, our puck outs weren’t great and stuff like that we need to work on.”

He’s spoken before about his decision to play hurling only this season – having juggled both codes in 2016 – and whatever about mental and physical advantages of only playing one, Collins is also realising the more practical ones.

“No matter what you do the inter county scene now, it’s going to be five days a week, maybe four some weeks, maybe six other weeks. When you are splitting your time between two you are not with the panel the whole time.

“You are losing that kind of a bond with the players, whether you like it or not. It’s a natural thing, you are not there the whole time, and that makes it that bit tougher. When you are with the team 100 per cent it makes it that bit easier, just being around the lads, it creates a better bond for yourself.

No surprise, however, that Clare are still in the football championship, and Collins reckons they won’t fear their trip to Mayo on Saturday evening: “Ah yeah, anyone that knows anything about football, knows how good that Clare side is, and what great players they have.”