Cork can keep moving in right direction with victory over Dublin 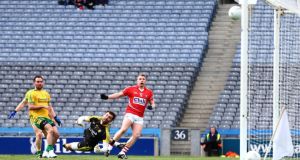 The counties with the biggest boxes to tick after last year meet in tomorrow’s Allianz Football League final in Croke Park. Both Dublin and Cork have been trialling more defensive orientations during the campaign to date and while it hasn’t been without its difficulties in either county, the impact has been as desired with steadier rearguards all around.

Although Dublin at times appear to struggle with more defensive tactics in that the more cautious approach looks to have blunted their more free-flowing attacking preferences, the outcome in the regulation season was impressive. Their scoring difference is more than 350 per cent higher than their nearest rivals – a healthy balance underwritten by defensive improvement.

For all that the holders have laboured to deal with blanket defences – especially in the home fixtures against Tyrone and Derry – the defeats have come in less structured matches against Cork and Kerry, and Dublin themselves are harder to break down and have the best defensive record in Division One. Allowing that Division One is different each year, Dublin have conceded a whopping 6-16 less than last season – nearly five points a match. The contraction on the other side of balance sheet shows that just 2-6 fewer was scored.

Cork’s improvement hasn’t been as vivid with the shrinking concession of 7-90 down by 2-7 on 2014, a figure offset by the 23 fewer points scored.

Unflagging Nonetheless, Brian Cuthbert’s team have looked more comfortable playing with the more fluid system. That’s largely because the team has been changed to suit the style with dynamic and unflagging running in and around the middle of the field. The injured Brian O’Driscoll will be missed;

along with his brothers Colm and Kevin, he is an exemplar of the new tactics, but Jamie O’Sullivan is also high-energy and adept at breaking forward.

Cork definitely have the advantage in terms of motivation. The defeat by Dublin in last year’s semi-final – with its 17-point turnaround – is acknowledged by manager Brian Cuthbert to have psychologically derailed them last summer.

Putting it up to Dublin or beating them would be proof positive that they’re going in the right direction.

Jim Gavin’s side don’t have the same certainties within their grasp. Judgment on what solutions they’ve found to last year’s problems can’t be conclusively handed down until August.

Positives to date include the newcomers John Small at centre back and Bryan Fenton as a ball-winning wing forward but centrefield doesn’t look any closer to being refreshed – although that won’t be as great an issue tomorrow – and Eoghan O’Gara’s season-ending injury takes with it the variation of early ball into a physical, sharp-elbowed forward.

The trouble with the statistical improvements is that the couple of big away wins against Mayo and Monaghan account for much of the progress. Then in the semi-final, when Monaghan availed of the happy opportunity to redeem the big defeat in Clones, part of that greater competitiveness came from Dublin’s inability to shackle the excellent Conor McManus.

Cork have not one but two inside forwards, Colm O’Neill and Brian Hurley, in form and can be relied on to do greater damage than Monaghan if they get the opportunities. They are also more settled – Cuthbert has been working off the same panel and hasn’t called in replacements for temporarily unavailable players – and have been showing better form.