Clíodhna O'Connor: There is no going back now for women’s GAA 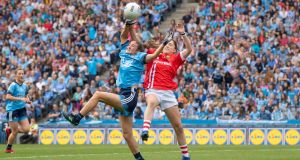 For years women’s Gaelic football was described as “the fastest growing sport”. Playing numbers were steadily rising, TG4 were broadcasting 15 to 20 live games a year, and the All-Ireland finals, a yardstick for the state of the game, were attracting between 25,000 and 35,000 fans. Things were good, but there were rumblings of a plateau. Did the sport need a catapult to take a jump forward?

Enter Lidl and its audacious plans to put the cart before the horse! A well-crafted marketing campaign has the ability to change people’s perspectives. They can make the normal the exciting, the mundane the extraordinary, and move minority sideshows into the fashionable mainstream.

Lidl’s #serioussupport campaign elevated the players and the sport to a higher level of importance, and started the momentum for what we have seen over the last few years – a higher standard of sponsorship, increased coverage of intercounty competitions and a massive jump in attendance at All-Ireland finals.

This elevation was the catapult that the game needed. The challenge now is that there is no going back. The game has changed, and we need to keep up!

This increased attention brings with it increased expectation. Expectation of professionalism and performance. All involved in intercounty football need to be ready for this shift and embrace it.

Previously our game was somewhat untouchable, it was a bit “un-PC” to criticise the game or the players. Those days are now gone – thankfully in my opinion. Analysts are tuning into earlier rounds of the Championships and have a greater knowledge of players and teams. This is leading to more discerning analysis.

Coaches have a responsibility to develop well-rounded players who have the tools to execute the demands of the game with style and confidence.

The word equality is often kicked around in the discourse surrounding women’s sports. We must tread carefully here as misuse of this word makes it meaningless at a time when equality is of the utmost importance.

Earlier this season I heard a player calling for the inclusion of “the shoulder” in the women’s game. In her view there was no reason why it shouldn’t be allowed, and she just wanted to be treated equally. Apparently there is a similar debate happening in camogie. This is a ludicrous justification for changing the rules of women’s football or camogie. These calls for rules changes come from three things – frustration with refereeing, a misguided view on equality and a lack of precision in the coaching of the game.

Regardless of what the rules of the game are there will always be frustration and debate about refereeing. See coverage of David Gough’s decisions in the men’s All-Ireland final. This is not a good enough reason to change the rules.

Also, equality does not mean that everything has to be the same. The absence of the shoulder from women’s football is not a judgment on a female’s ability to deal with physical contact but rather a promotion of other aspects of the game.

Gaelic football, played by men and women, is a game that demands great speed, agility, evasion and skill from players. When coaching men’s football I see players winning possession of the ball and rather than looking for gaps and getting into space they slow down so that they can hit some fella a shoulder for no good reason other than to assert their physical dominance. More often than not “the shoulder” slows the game down.

The current rules of women’s football promote speed, agility and evasion. Be fast, get your body in the optimum position to win the ball clean, evade contact and execute your skill. There is no deliberate contact allowed. Bodies will come into contact when contesting a loose ball, but the game should be played and coached with a focus on speed, agility and evasion rather than physical contact.

Simply because it makes for a better game, those skills are far more complex and athletic than the ability to hit a shoulder, and a game based on speed and skill is exciting and impressive to watch.

This brings us back to coaching. When coaches don’t know exactly what to coach they usually end up at the physical; Don’t give her an inch! Stand your ground! Send her into next week!

Coaches are doing our players a disservice by not paying half enough attention to the basic skills and tactical awareness that is required to play the game at a high level.

We are at a time in women’s football when we need our standards to rise. We are being watched and measured, and we have created an expectation of high-level performances by players and coaches.

Allowing more physical contact will slow the game down, and would be an easy out for coaches. We need to coach our players to master the skills of the game and have exceptional ability when it comes to speed, agility and evasion. That is the game I want to see in Croke Park, not one where a player slows down her attack in order to try and send her opposite number over the side line with a shoulder just because she can.

Now that our game has changed we need to act with clarity of purpose in relation to how we develop the game for continued growth.

Cliodhna O’Connor is a former Dublin player who works for the Ladies Gaelic Football Association.