Remembering when Kerry kicked ahead of Dublin 78 years ago

This year will be only the third replay between the counties, and the first in Croke Park 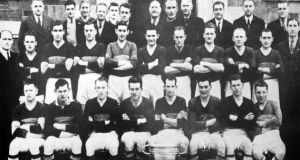 The Kerry team that won the All-Ireland senior football championship in 1941 after winning a semi-final replay against Dublin – in Tralee. Photograph: Terrace Talk

Saturday will be only the third championship replay between Dublin and Kerry, an infrequent rate of occurrence in 31 matches since the first meeting in 1892. The weekend will, however, be the first time the two counties replay an All-Ireland final. More curiously, it will be also be the first time they replay in Croke Park.

In modern times the 2001 quarter-final and its replay in Semple Stadium, Thurles, were notable for being the first year of the qualifier system, and Dublin, as defeated Leinster finalists, were for the first time contesting a championship against their great rivals having lost a match.

Sixty years previously there was another landmark meeting, this time in the semi-finals. Kerry were on the third leg of a three-in-a-row, having won the All-Ireland in 1939 and ’40. The team still featured legendary figures such as full back Joe Keohane, centre-fielder Paddy Kennedy, Paddy Bawn Brosnan and “Gega” O’Connor in the attack.

Dublin were still in the throes of the county’s longest All-Ireland famine – 19 years – which wouldn’t end for another season, but the 1941 semi-final was a close-run thing.

They hadn’t won Leinster for seven years and didn’t go into the All-Ireland semi-final as provincial champions – they were nominated by the province because of the foot-and-mouth outbreak that year, which caused the Leinster final against Carlow to be postponed until November. Postscript: Dublin won by 4-6 to 1-4.

In a low-scoring match on August 10th, Dublin very nearly had the champions beaten. PD Mehigan, writing as Pat’O, summarised:

“In a strenuous if not a brilliant game at Croke Park yesterday Kerry, champions of 1939 and 1940, had the narrowest possible escape from defeat. At the very last minute Murt Kelly drove high at the Dublin posts and the ball glanced off the upright for the balancing point. Dublin had played the better football but both sets of forwards shot wildly when well placed.

“As I anticipated here last week, it was a low-scoring game and without a goal, and the backs had far the better of the argument throughout. Keohane, Myers, Casey and Dillon shone in Kerry’s defence whilst Kennedy, Falvey, Murphy and Quinn played steady football for Dublin. The replay in Tralee next Sunday should prove a thriller.”

Up until the 1930s, All-Ireland semi-final arrangements were fluid enough. In pursuit of the five-in-a-row in 1933, Kerry had gone to Breffni Park to play Cavan, where they were beaten, but the county’s next semi-final, a year later against Dublin, was played in Tralee – with Dublin winning surprisingly comfortably.

By this stage the tendency to spread the semi-finals around the country was dying, and the 1941 replay in Tralee would be the last played outside Croke Park until 1983, when Dublin memorably went to Páirc Uí Chaoimh to take on Cork in an All-Ireland semi-final replay.

Just as on Saturday there was a subtext to the match. Kerry had caught up with their rivals on the All-Ireland roll of honour and by this year, both had 14 titles. The lines on the graph would cross in 1941, when Kerry went on to win, and although Dublin responded the following year, the county would never again nudge ahead of the new brand leaders.

A week later, August 17th, there were 20,000 in Tralee for the replay and Dublin hadn’t the best preparation with half of the team deciding to overnight in Limerick and ending up arriving late after an interminable journey on one of the wartime turf-trains. On the field, according to Pat’O, they were “outclassed” 2-9 to 0-3 and once Gega O’Connor scored a 20th-minute goal, it was “the beginning of the end”.

Corner-back for Dublin was Peter O’Reilly, who went on to have a significant coaching career, effectively player-coach a year later when Galway were beaten in the All-Ireland final and trainer of the team that reached the 1955 All-Ireland against Kerry and who finally won the Sam Maguire in 1958.

The season ended happily for Kerry, who completed the three-in-a-row by defeating Galway 1-8 to 0-7.

It was Paddy Bawn Brosnan who coined the immortal description of those Kerry teams: “In our day we had a few farmers, a few fishermen and a college boy to take the frees.”

Rocky Johnson: Rags to riches pioneer for black wrestlers 17:00
DeChambeau has Majors on his mind as he defends in Dubai 16:21
Jack Byrne has Euro 2020 ambitions but Rovers come first 16:08
Saracens say they want full salary cap report to be published 15:44
Edinson Cavani likely to choose Atlético over Chelsea 14:48
Crossword Get access to over 6,000 interactive crosswords