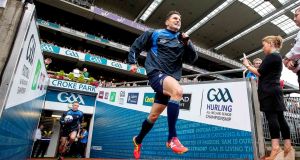 Dublin’s Bernard Brogan runs out onto the pitch for the All-Ireland final replay. Photograph: Inpho

Bernard Brogan was expected to play a key role for Dublin in the absence of Diarmuid Connolly.

Dropped for last year’s All-Ireland final replay, Dublin’s go to man for the guts of the last decade took the omission in his stride. Into his 10th championship season with the county’s senior team, “well he wouldn’t be one of those babies to throw the toys out of the pram, if he’s not playing,” his brother Alan explained earlier this month.

Not that you’d have blamed him. The 33-year-old scored 1-4 against Westmeath last year. The 2010 Footballer of the Year has four All-Star awards, but with Dean Rock, Kevin McManamon, Con O’Callaghan, Paddy Andrews, Paul Mannion, Cormac Costello, Eoghan O’Gara and Conor McHugh all fighting for three jerseys, perhaps he’s right to have found peace with his predicament.

He is no longer an automatic.

A return to form was forecast this year, the jersey would again be his to lose, however Jim Gavin has opted against naming him in the first fifteen for Sunday’s Leinster semi-final against Westmeath. Confirmation of the above.

Paddy Andrews comes in for the suspended Connolly in the only change to the team that overcame Carlow.

That means, if the teams play as selected, Cuala’s young dualstar Con O’Callaghan will resume in the inside line. Flanked by free-taker Dean Rock and McManamon.

Brogan made his first appearance of 2017 in the league encounter against Kerry in mid-March, off the bench in the 69th minute.

He then made his first start of the campaign against Roscommon, scoring 0-3, before scoring 1-1 off the bench against Monaghan. He started and finished the league final against Kerry, but failed to score in the defeat.

The St Oliver Plunketts clubman scored 0-2 off the bench against Carlow. That made him the team’s second top scorer from play, despite featuring for less than 25 minutes.

Gavin will hope that pushing the likes of Brogan to his limits could be the key to lifting the Dubs from their lull in recent months. And provide the level of motivation needed to push for a third All-Ireland in a row.

There’s also no place for Philly McMahon, the Ballymun Kickhams man missed the quarter-final win through suspension, but has since picked up a hamstring complaint.

Meanwhile Frank Boyle comes into the Westmeath backline in place of the injured Paddy Holloway.

Paul Sharry and Kieran Martin are named in the half forward line, with Ger Egan at midfield and John Heslin to wear number 14.