Between the 13th minute and half-time, Dublin scored 1-11. Westmeath only scored 0-1 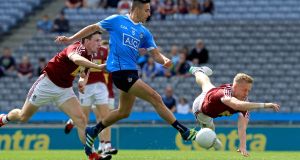 Just another waltz. Dublin haven’t won a Leinster game by less than a double-figure margin since 2013 and they weren’t about to start here. They romped through a hopelessly compliant Westmeath side, whistling a happy tune as they went.

They had 31 points to spare at the end - it was a margin entirely of their own choosing. It was, for what it’s worth, Dublin’s record win under Jim Gavin.

Of all the gameplans teams have come up with to try and give the Dubs a game in their own province through the past decade, most had long since abandoned the one Westmeath attempted here.

They played much of the opening half with four forwards and tried to go man-on-man with no sweeper at the back. Dublin took 12 minutes to work out that what they were being offered was indeed a gift-horse and promptly went to town on it.

Between the 13th minute and half-time, Dublin walked in 1-11. Westmeath only scored a point in reply. Somewhere in the middle of the shelling, they finally funnelled 14 men back and tried to clog up their defence. The horse hadn’t so much bolted by then as galloped to the next farm, found a distaff companion and sired a Champion Hurdler.

Dublin filled their boots, freely and fully. Con O’Callaghan knocked over three points from play in the opening half, Paul Mannion did likewise. Dean Rock split the posts with two 45s, both of them after goal chances were blocked down close to goal.

Rock also palmed home Dublin’s first goal after Eric Lowndes powered through the middle of the Westmeath defence in the 28th minutes.

It all washed out as a 1-15 to 0-5 lead at half-time. The game had nothing left in it for Westmeath at that stage, which made their decision to nominally have a go at Dublin all the more strange.

In their Leinster final appearance in 2015 and 2016, they were well within touching distance of Dublin at half-time, having parked the bus all through the opening period. They gave themselves a shot at a result. Here, they had no shot.

The second half was a coconut shy job. Dublin played away as they pleased, knowing that if one shot didn’t come off, there’d be another chance along in a matter of seconds. Eoghan O’Gara came off the bench to plant a catch-turn-and-strike dinger of a goal past Darren Quinn in the Westmeath goal on 41 minutes.

Bernard Brogan came off the bench and chipped a free in the 62nd minute - from there to the end, Dublin outscored Westmeath 2-7 to a point. Ciarán Kilkenny and Kevin McManamon piled in with a goal apiece as the hour ran down. Mannion was liberated by non-existent Westmeath marking and finished the day with eight points from play. Dublin had 11 different scorers, Westmeath had four.

Dublin into a Leinster final, then, where Kildare will surely have something better than this waiting for them. They have to, don’t they?