Kevin Walsh’s Tribesmen get past Derry in a miserable Salthill 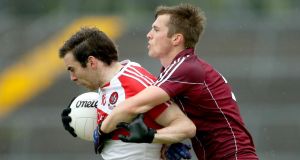 A commendable evening’s work from Galway in rotten conditions in Salthill.

They played better against the gale-force wind and overcame a ponderous enough first-half performance to wriggle through against a Derry side whose atrocious away record continues for another season. By next summer, it will be six years since Derry won a game outside their own county in the qualifiers, and they’ll be looking to break that duck next year without manager Brian McIver.

McIver was deeply upset with the performance of the referee and stepped down in the post-match press conference.

“Players should be deciding games not referees. And that referee decided that game,” he told reporters.

They had every chance here though. Despite playing into the monsoon in the first half, they reached the break just three points down and having played much the better football. But they just didn’t come out of the dressing room in the second half.

That said, they had cause to complain about a pivotal refereeing call that went against them in the closing 10 minutes. They were 0-11 to 0-7 behind when Eoin Bradley fisted a ball across the small square with Cailean O’Boyle poised to palm it home, only for the Derry forward to appear to be pushed form behind by Finian Hanley. Referee Conor Lane, who to put it mildly had given Galway the more benign side of his favour all night, decided Hanley had no case to answer.

It seemed a huge call at the time and was compounded within a minute as Danny Cummins finished off the best move of the match down the other end to crash home the Galway goal. It put Galway 1-11 to 0-7 ahead and nailed the coffin shut for Derry.

What a curios evening of football this was. On a day when the wind was always going to be a jet engine behind whichever team had it, it seemed surprising that Derry chose to play into it in the first half.

But to their credit, they dictated the terms of engagement from the start, wind or no wind. They were more structurally sound than Galway and looked far better acquainted with what their gameplan was supposed to look like.

Galway looked lost and took the longest time to get their hands on a roadmap. They ceded the first three points of the game to Derry, despite the fact that the northerners were having to battle the elements to get within shooting distance. But Derry’s possession game was made for days like this - patiently, fastidiously, they made their way through the middle third and drew a foul or got a shot away.

Eoin Bradley and Danny Heavron kicked fine scores and Benny Heron drove a piercing free through the wind. With 10 minutes on the clock, Derry led by 0-3 to 0-0 and Galway seemed thoroughly befuddled by what was going on. They were playing twilight football, neither attacking enough to use the wind to kick at goal nor defensive enough to stop Derry wriggling into enough space to get sighters.

Galway appeared to have no real plan for getting back into the game and were blessed when referee Conor Lane provided them with one. Gary Sice took the game upon himself by driving at the Derry backline and Lane started awarding Galway some very soft frees. On top of which, he moved the ball up three times for backchat, the very backchat that was clearly inspired by the softness of the frees.

Bit by bit, Galway got a foothold. Sice kicked five frees, Paul Conroy kicked another couple. But it was hit and hope stuff a lot of the time. A devastating indictment of Galway’s first-half performance was that despite the gale at their backs, they didn’t score a point from play until the second minute of injury-time. Gareth Bradshaw showed the rest of them how to do it with a terrific score on the run.

It gave Galway a lead of 0-8 to 0-5 at the break. It seemed a fairly slight return and you sense that Derry would only have to show the same coherence and professionalism as in the first half to see the game out.

Easier said than done, though. For reasons best known to themselves, Derry lost their ability to keep possession. Galway upped their effort but Derry started wandering all over the pitch and rushing their shots.

They closed the margin with a couple of points from Heavron and Benny Herron but Galway held firm. Bradshaw drove on from wing-back, Gary O’Donnell did likewise from centre-back. Sice landed a huge free, O’Donnell speared a smart one of his own. With 10 minutes to go, Galway had pushed themselves out to a lead of 0-11 to 0-7. They were the better side by now but the wind meant that Derry were always going to make a chance, despite themselves.

That chance came with the penalty that never was. The call looked tough on Derry, who would have been a point down with plenty of time left and the wind at their backs had they netted a penalty just then. But they didn’t and they weren’t and Galway were in the clear.