Ballintubber too strong for Aughawillan 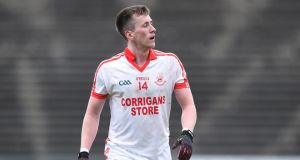 Ballintubber’s Cillian O’Connor scored six points for his side.

Three second half goals from Ballintubber ended Aughawillan’s hopes in a game of contrasting halves played in excellent conditions at Pairc Sean MacDiarmada, Carrick-on-Shannon on Sunday.

In a low scoring first quarter Cillian O’Connor opened the Ballintubber account with a pointed free on three minutes. O’Connor struck again the 13th minute but, despite dominating possession, the Mayo men squandered several scoring opportunities to extend their lead.

Aughawillan were also guilty of a sequence of misplaced passes but they finally got on the scoreboard with a well taken point from play by Gary Plunkett in the 14th minute, followed almost immediately by a second from brother Mark to level matters.

Ballintubber then hit back with three unanswered scores from Alan Plunkett (2) and a Cillian O’Connor pointed free to extend their lead.

In the final 10 minutes of the half both sides shared points and Ballintubber deservedly led 0-8 to 0-5 at the break.

In a second half where Ballintubber moved into a higher gear, Alan Plunkett was on the scoreboard again one minute into the resumption followed by two Cillian O’Connor frees .The midfield pairing of Jason Gibbons and Diarmuid O’Connor were outstanding throughout, dominating the exchanges and denying the Leitrim champions crucial possession.

The introduction of substitute Jamsie Flaherty in the 42nd minute helped Ballintubber kick on as he scored a goal within a minute and added a second 10 minutes later. A third goal from Alan Plunkett put the game well beyond Aughawillan. To their credit the Leitrim champions remained competitive and were rewarded with a late consolation goal from Ciaran Gilheaney.