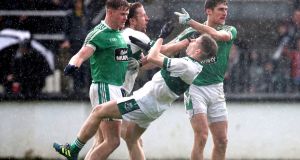 This is the pure drop. If the glory of the club championship can be overegged at times by true Gaels flexing the trueness of their Gaelness, an afternoon like this doesn’t need any wild claims made for it. Portlaoise and Moorefield played out a small winter classic as a suddenly harsh November grey settled over Newbridge.

In the end, the Laois side made amends for last year’s sinful coughing up of the same fixture, whether they can parlay it into a Leinster title as Moorefield went on to 12 months ago remains to be seen. Their semi-final dance with Kilmacud Crokes ought to be well worth the look.

On a day when the wind blew straight up St Conleth’s Park and into the town beyond, Portlaoise had the first victory of the day when they won the toss. They took the wind - and the rain, and the rest - at their backs for the opening half hour and made it their mission to push the game as far out of Moorefield’s reach as possible. When they went in at the break 1-8 to 0-4 ahead, the job was more than half done.

“Hell of a battle,” said Portlaoise manager Malachy McNulty afterwards. “Massive battle. We knew coming in, we always said it was going to be an arm-wrestle. Footballing-wise, Moorefield had a lot to offer and we know we’re a good footballing side as well. But at this time of year, it comes down to a real physical battle. It was kind of a war of attrition out there and we felt that it would be won or lost in the middle third.

“The stats at half-time said that we won 13 of the 19 breakdowns in the first half and for me, that’s where the game was won and lost. You’re playing the Leinster champions, you’re going to want to hit them hard and fast and notch up as many scores as possible. But look, you can’t guarantee that with the wind either.”

That first half tally was a tribute to Portlaoise’s time on this particular road.

This is their 11th Leinster campaign in the past 12 seasons and their drivers throughout were the touchstones of so many of those teams down the years.

Craig Rogers tiptoed in for a smart goal after 20 minutes and supplemented it with a nice point on the turn and an excellent long-range free. Paul Cahillane kept the scoreboard rolling, Cahir Healy set the tone in the centre of their defence.

Even so, arguably their most important player in that first half was goalkeeper Graham Brody. Two fine saves inside a minute denied Eddie Heavey and Ronan Sweeney at a time when a Moorefield goal would have been a huge score against the conditions. When Rogers slid home the Portlaoise goal a minute later - after an ill-advised flap at a high ball by Moorefield keeper Thomas Corley - Brody’s heroics were further underlined.

That said, he wasn’t without sin as Moorefield went about mounting a second-half comeback. After the ageless Sweeney nailed the first point of the half soon after the restart, Brody made a trademark sally out of goal soon after only for Portlaoise to get overturned about 30 metres out.

In the hubbub that followed, Heavey took a pot at the posts which the back-pedalling Brody could only whiff at and the inrushing Niall Hurley Lynch punched home the rebound. With only four minutes of the second half gone, it mean that Moorefield now had a much more manageable 1-8 to 1-5 scoreline to deal with.

As has been noted, however, this is far from Portlaoise’s first rodeo. Brian McCormack stopped the bleeding at the other end and Cahillane sniped two inside a minute to push the gap back out to six with 38 minutes gone.

Moorefield kept coming. It was a rip-roaring game now, end-to-end at times with a quality of scoring that often belied the conditions. Eanna O’Connor roared into the game for Moorefield, giving the previously immense Healy a runaround for the second half. He ended the day with three points from play, all coming as Moorefield clawed their way back to the horizon.

They never brought the margin below three, though. And though a late scramble in the Portlaoise square could on another day have seen a penalty given the Kildare side’s way, ultimately they would have been a little flattered by taking this to extra-time.

Portlaoise were the better side and deserved their win but they have a big hurdle to jump now in Crokes. For all their experience in Leinster, they haven’t won the province since 2009, routinely falling to Dublin sides as they’ve met them. Time to change that record.