Galway get the lion’s share of All Star hurling nominations

All Ireland winners secure 14 nominations, including Joe Canning for Hurler of the Year 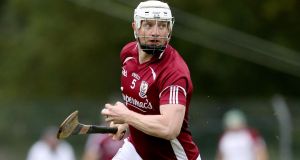 Galway’s Joe Canning, who is shortlisted for Hurler of the Year. Photograph: Tommy Dickson/Inpho

Galway have won the lion’s share of the 2017 All Star hurling nominations, claiming nearly one-third of the available positions and more than double what they achieved last year. The longlist for this year’s awards coincides with the unveiling of new sponsors PwC.

The county reclaimed the All-Ireland title after a gap of 29 years earlier in September after an exciting final against Waterford, but, viewed over the calendar year, Micheál Donoghue’s team’s domination of 2017 is unarguable.

They also won the league title in April with an overwhelming victory against their predecessors as champions, Tipperary, who they also beat in a nailbiting All-Ireland semi-final, and the Leinster championship with another comfortable win, this time against Wexford before a record attendance for the final of over 60,000.

The only competitions they failed to win were the Walsh Cup – they were beaten in the final by Kilkenny – and Division 1B of the league, to which they were beaten by Wexford, who secured promotion in manager Davy Fitzgerald’s first season with the county.

Among Galway’s 14 nominations is centre-forward Joe Canning, who is also shortlisted for Hurler of the Year, and their only All Star winners in 2016, the two Burkes, Daithi and David.

The champions also take one of the goalkeeping nominations in Colm Callanan, who was also shortlisted 12 months ago, while last year’s nominee for Young Hurler of the Year, Conor Whelan, is again nominated for that award as well as for an All Star.

The year climaxed with Galway’s 0-26 to 2-17 defeat of Waterford, who have secured 11 nominations, their highest total in the awards scheme to date.

Defeated semi-finalists Cork, who are also Munster champions for the first time in three years, are next in the rankings with eight nominations, followed by last year’s champions Tipperary with five, one more than Wexford, placing them ahead of Kilkenny with two and the solitary nod given to Clare.

Cork’s eight include some of the exciting young talent that helped drive their successful provincial campaign.

For Kilkenny, who won four All Star awards last year, the two nominations will no doubt be disappointing, with goalkeeper Eoin Murphy, the outgoing All Star, unlucky after another good year. Nominated are Cillian Buckley, arguably their best player this year, and former Hurler of the Year TJ Reid.

Clare are represented by Shane O’Donnell, scorer of two goals against Limerick in the Munster semi-final last June.

The All Star awards are jointly presented by the GAA and the Gaelic Players’ Association, and the list of nominations also includes three candidates for the Hurler of the Year award: Joe Canning and Waterford pair Jamie Barron, an All Star last year, and his partner at centrefield for the county Kevin Moran, who between them scored a phenomenal 5-23 from play in the championship.

Canning, who for so long carried Galway’s hopes and expectations, completes the options after a championship in which he made decisive interventions in the All-Ireland semi-final, hitting the winner from the sideline in the dying seconds of the match, and the final, in which his free-taking was a vital supply of scores, as the county’s long wait for Liam MacCarthy ended.

In the Young Hurler category, there is a second nomination for Conor Whelan, who had an electric year, putting up some big scores, but more importantly constantly working in the corner forward role. Also nominated is Conor Gleeson, who did an exceptional man-marking job on Cork’s Conor Lehane in the All-Ireland semi-final – at the end of which he unfortunately got a red card, ruling him out of the final.

They are joined by Cork’s Mark Coleman, one of the county’s young players of whom Irish Times hurling analyst Nicky English said after the Munster final: “The younger players are pushing on the more experienced team-mates with their enthusiasm and willingness to work. As an example Mark Coleman is a fabulous player and in the mould of the best Cork wing backs. They’re beautiful hurlers and use the ball well and have a great temperament.”

The All Star team will be selected in November by a panel of national Gaelic Games correspondents, while the players of the year awards will be voted upon by the players themselves.

The final 15 players, who will make up the PwC All-Star Hurling team of 2017, are to be presented with their awards at a banquet in Dublin’s Convention Centre on Friday November 3rd, and the event will be screened live by RTÉ.