Malachy Clerkin looks at the action across all four divisions 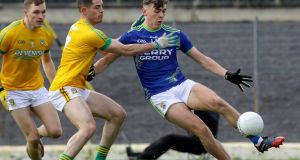 ALLIANZ FOOTBALL LEAGUE
DIVISION ONE
Mayo v Kerry*
(MacHale Park, 7.15 – Live RTÉ 2 & Eir Sport 1)
*Rescheduled for Sunday at 1pm due to Storm Jorge
Referee: Martin McNally (Monaghan)
The best cure for the occasional outbreak of the dreaded dramavirus in Mayo has always been a good win against the head. It’s not impossible here, not while Kerry are conceding so generously at the back – only Leitrim and London giving up more scores in this campaign than Peter Keane’s side.

It will be interesting to see if James Horan continues with Lee Keegan in the full-back line. He will presumably be on David Clifford if so, a move that might inadvertently do Mayo a favour and get him posted back out the field for the rest of the year. Verdict: Kerry

Tyrone v Dublin
(Healy Park, 7.15 – Live Eir Sport 2)
Referee: Cormac Reilly (Meath)
If Storm Jorge has his way, Healy Park will be a bog. So check your local listings, kids. If it goes ahead, this is a shot to nothing for Tyrone. Staying in the division will likely come down to their final two games, home to Donegal and away to Mayo – so they can go for broke here in the knowledge they won’t be significantly worse off regardless of what happens.

That said, they haven’t scored a goal since the 10th minute of the opening game so it’s hard to say what going for broke would even look like. Dublin are in curious form but they’ll be too good here. Verdict: Dublin

DIVISION TWO
Laois v Kildare
(O’Moore Park, 7.0)
Referee: Joe McQuillan (Cavan)
Assuming it’s not claimed by the weather, this is the match of the weekend. The sheer relish Laois people would take in leaving Kildare having to win two-from-two in their closing games to stay up could hold any storm at bay. Jack O’Connor’s side have been the league’s biggest disappointment and need to get it together soon or Tier Two beckons. Laois haven’t beaten Kildare in league or championship since 2010. Not a bad time for that streak to end. Verdict: Laois

DIVISION FOUR
London v Wicklow
(Ruislip, 1.0)
Referee: John Hickey (Carlow)
It’s been an even more miserable league than usual for London, who look to have lost momentum since getting rid of Ciarán Deely. Verdict: Wicklow

Waterford v Carlow
(Fraher Field, 7.0)
Referee: Brendan Griffin (Kerry)
Can we say for certain that Waterford won’t follow last week’s heroics against a Carlow side that hasn’t won since the opening day? We cannot. Verdict: Waterford

ALLIANZ FOOTBALL LEAGUE
DIVISION ONE
Donegal v Monaghan
(Ballyshannon, 2.0 – Deferred coverage, TG4, 3.45)
Referee: David Coldrick (Meath)
The now retired Vinny Corey was always Michael Murphy’s nemesis in games between these two, so it will be worth watching to see what Monaghan do with the Donegal captain here, keeping the summer in mind. Likely to be Paddy McBrearty’s first start of the spring, after coming in for the closing quarter-hour against Dublin. Monaghan’s nine-point win over Mayo last week was their biggest margin of victory in the league since 2014 and their biggest in Division One since the leagues were redrawn in 2008. This game decides whether they try win the thing out or be happy with survival for another year. Verdict: Donegal

Meath v Galway
(Páirc Tailteann, 2.30)
Referee: Niall Cullen (Fermanagh)
Meath came out on top in this fixture the last time it was played – three years ago in Division Two. It took Andy McEntee’s side another couple of seasons to join Galway in the top flight and they’ve found the air pretty thin. They’re the lowest scorers in the division and are only averaging around 1-6 from play in each game. That won’t get it done here, against a Galway side who are the top scorers in the country. Robert Finnerty’s light has been a little hidden under Shane Walsh’s bushel but he has continued his Sigerson form to bring another thoughtful element to their forward line. Verdict: Galway

DIVISION TWO
Fermanagh v Armagh
(Brewster Park, 2.0)
Referee: Ciarán Branagan (Down)
A crucial game at either end of the table. Fermanagh can’t really afford another home defeat, while Armagh could do without another wobble. Kieran McGeeney’s side probably aren’t getting full value for how well they’re playing. Only Dublin, Kerry and Cork have raised more white flags than them so far and yet they’re still making heavy weather of actually winning games. Despite Fermanagh’s solid record at home, however, this is a chance for Armagh to make a break for Division One. Verdict: Armagh

Roscommon v Westmeath
(Dr Hyde Park, 2.0)
Referee: Barry Tiernan (Dublin)
Westmeath will surely come to rue not holding on against Armagh last week. Having done the hard bit in not just coming back in the second half but completely overwhelming their visitors, it must have tasted like a bitter point in the end when Jamie Clarke pulled out a draw. It leaves them needing at least the same again against the neighbours here if they’re going to stay in the promotion hunt. Verdict: Roscommon

Cavan v Clare
(Kingspan Breffni Park, 2.30)
Referee: Jerome Henry (Mayo)
Hats off to Mickey Graham, who keeps getting more out of less. Despite all the defections, Cavan were impeccably accurate against Fermanagh last week – Ryan McMenamin’s side restricted them to just 17 shots in the game and they still came away with a winning total of 2-11 (hats also off to Gaelic Life for the stat). Clare probably don’t deserve to be bottom of the league, since two of their defeats have been by a single point. The 3-1 odds do them a disservice here. Verdict: Clare

DIVISION THREE
Louth v Leitrim
(Dowdallshill, 2.0)
Referee: Liam Devenney (Mayo)
Both sides look doomed to the drop so this is likely to be the only spark in the darkness for one of them. Louth have been slightly unlucky not to pick up a point yet and can make amends here. Verdict: Louth

Cork v Derry
(Páirc Uí Chaoimh, 2.0)
Referee: Fergal Kelly (Longford)
Mind-boggling as it is to think it’s only six years since these two finished first and second in Division One and both can claim to have taken the first steps along the comeback trail. Derry will be reliably sticky but Cork should have too much. Verdict: Cork

Longford v Tipperary
(Pearse Park, 2.30)
Referee: Niall McKenna (Monaghan)
While Tipperary are the only side in the country who haven’t scored a goal yet, their 0-21 against Cork last week hints at better things ahead. Longford can’t afford to lose this but have started to look rocky after some early flat-track wins. Verdict: Tipperary

Offaly v Down
(O’Connor Park, 2.30)
Referee: James Bermingham (Dublin)
Down have done the hard bit, drawing with Tipperary and beating Derry and Longford. If they win out against Offaly, Louth and Leitrim, they will go up. Offaly have done well to consolidate Division Three status but this should be a bridge too far. Verdict: Down