Mixture of regret and relief as Kerry lament missed chances

Kerry manager praises Mayo’s intense game, and says it will benefit both teams in replay 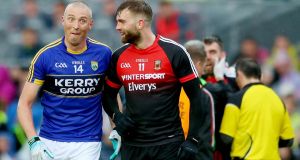 Eamonn Fitzmaurice said that it was a typical draw, a mixture of regret and relief. The Kerry manager had watched his team lose track of things alarmingly but respond and very nearly thieve the whole thing at the end.

The relief won’t have been as profound as three years ago when they trailed by five points in the 66th minute, but the regret at not winning is probably a little sharper given that they led until the last minute and even then had the ultimate chance of kicking a long-range free only for Bryan Sheehan’s shot to balloon harmlessly down on the defence.

The big tactical talking point was Mayo’s decision to mark Kieran Donaghy with Aidan O’Shea, which ended up as robbing Peter and still leaving Paul short, with the Kerry full-forward exposing his opponent’s defensive inexperience without contesting much in the way of high ball while O’Shea’s presence was missed farther forward.

“It was a thing we’d discussed,” said Fitzmaurice. “There was a possibility it could happen, that they could match him up with Kieran. We felt maybe it would be down the list of possible options, but it was something we had discussed.”

Asked had it been to Kerry’s benefit, he deadpanned.

“I’m not sure. I think he did fine. He won one or two balls in the first half and rooted away with Kieran, didn’t allow him to have a huge impact on the game.”

He said that the switch hadn’t unduly influenced Kerry’s tactics, although it was noticeable that there was a reluctance to shower the big full-forward with high, dropping ball.

“No. I don’t think so. To be fair to Mayo, they were very intense in the middle third. As they do, they tackled ferociously and worked really hard. I think conditions helped that. It was hard for our kickers to get their head up and get the ball in as we would have liked, but that’s something for us to work on for next week now.”

The upside for Kerry is that after a fairly undemanding championship to date, they have now been brought up to speed by a battle-hardened team whose own form is on an upward curve.

“I couldn’t put a percentage on it but a game like that is invaluable because, regardless of what you try to do in training, which we do as intense as we possibly can, you can’t replicate that kind of championship do-or-die stuff so it will benefit both teams for next weekend.”