GAA weekend that was: All is far from okay at Kilkenny

Of seven matches they’ve played this year, Cody’s men have only beaten Dublin and Cork 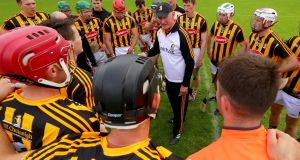 Kilkenny manager Brian Cody looks to get his side going before their loss to Wexford. Photo: Oisin Keniry/Inpho

The great old Observer golf writer Peter Dobereiner had it right when it came to the Monday morning business of parsing the weekend’s sport. “A columnist,” he said, “hides in the mountains during the heat of battle and then comes down to bayonet the wounded.” Kilkenny probably suffered enough on Saturday night at Wexford’s hands, so we’ll go easy with the point of the spear. But there’s no sense in pretending everything is okay.

The 1-20 to 3-11 defeat in Wexford Park means that, so far in 2017, Kilkenny have played seven matches in league and championship – they’ve lost four, drawn one and only beaten Dublin and Cork. They’ve been beaten in two matches in a row against Wexford for the first time since 1988. They’ve lost two successive games to another team for the first time since Tipperary in 2010 and for only the fourth time in Brian Cody’s 19 seasons in charge.

These are not debilitating numbers by any means. What they do amount to is life as generally lived by other counties, not Cody’s Kilkenny. Pointing them out need not be taken as an attempt to write them off – they’re purely a means of illustrating how they have slid backwards to join the peloton.

Kilkenny are just another team at the minute. Nothing special, overlords no more. The reason we can say that for sure is that we only know what special is by having watched them. It’s no libel to pitch them as not at the level they once were – who in the history of the game was ever at that level?

Watching them on Saturday night, it was more glaring than ever that they’re at least two forwards short of what’s needed. It isn’t that they don’t have the players, it’s more that they don’t have the bit-players. Colin Fennelly and TJ Reid were tireless and, at times, heroic. But Richie Hogan, Walter Walsh, Ger Aylward and Pádraig Walsh – all of them All Stars – were all taken off, the latter two before half-time. Cody needed his supporting cast to carry the day and they just didn’t have it in them.

This has been a growing problem for Kilkenny. They have come to rely far too heavily on Reid’s prowess from placed balls for their scores. Of the 7-114 they’ve put up so far in 2017, Reid has been responsible for 5-56. That’s a whopping 52.5 per cent of their scores. Four of their seven goals this year have been Reid penalties.

Ger Loughnane wasn’t far off the mark last year with his functional-beyond-belief remark. The underlying point that got lost in all the kerfuffle was that functional is actually no bad thing – as long as it functions. But when Richie Hogan is below par, when Walter Walsh isn’t a force of nature, when Pádraig Walsh is playing out of position and looking like it, then there’s not a lot of functionality left for Kilkenny to rely on.

The list of extras in the forward line who’ve come in to try and get a spot in the main cast over the past few seasons is growing by the game. Mark Bolger had half-chances for goals smothered by Wexford goalkeeper Mark Fanning, Liam Blanchfield made little impression. The sight of Richie Reid, brother of TJ and nominally the team’s sub-goalie, coming on for Hogan as Cody’s last throw of the dice in the 68th minute spoke volumes. The cupboard isn’t bare – this is Kilkenny, after all – but it’s fairly spacious in there just at the minute.

In a moderate year, it would be mad to say they have no shot at an All-Ireland. You can’t on the one hand assert that the championship is wide open and on the other dismiss the chances of Cody rounding them into some sort of shape and form through the qualifiers.

Ask yourself this – which teams would you make favourites in a match-up against them from here on out? Galway, fair enough. Waterford? Hmmm. Tipp? Well now – that would take a bit of pondering. Cork? No way. Wexford? Could they really lose to them three times in a season?

Kilkenny aren’t gone, is the point. But they’re nothing to be feared, is the point as well. That particular psychological weapon has been decommissioned for now. When people say the summer has been blown wide open, that’s what they really mean.