The little part of Roscommon that will, for GAA purposes, be forever Mayo

Published ahead of the 2011 Connacht final; The strange situation of Ballaghaderreen 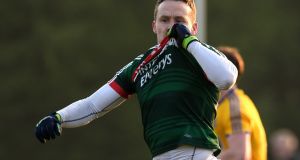 John O’Mahony, Fine Gael TD, answers his phone. There’s a reporter on the other end. Wants to chat about a piece for the Connacht final. No problem, says Johnno, fire away. “It’s about the frontier town of Ballaghaderreen,” you say.

“Oh Jesus,” says the deputy for Mayo. You get the feeling he half wishes you were ringing about a hospital closure somewhere.

Ballaghaderreen is an outpost, a glitch in the system. Send a letter to the nice people there and you’ll write Ballaghaderreen, County Roscommon on the envelope. But wander into the market square and you’ll see a Mayo flag hanging from the front of Durkin’s Bar.

Open your Connacht final match programme tomorrow afternoon and underneath the name of Mayo vice-captain Andy Moran will be Bealach An Doirín, county champions in 1972 and 2008. Mayo county champions, that is.

Four and a half miles inside the Roscommon border, it runs neck and neck with Castlerea for the title of third biggest town in the county. It is administered by Roscommon County Council, its road swept and its streets kept by same. The local soccer team plays in the Roscommon league. When the children of the town go off to compete in the Community Games, they do so in the primrose and blue of Roscommon.

In every conceivable facet of life, they are Roscommon people. Except when it come to the GAA.

For GAA purposes, it is Gaza. A little part of Roscommon that will be forever Mayo. Maybe the most famous Mayo footballer of them all came from here – Seán Flanagan, still one of only six men to lift the Sam Maguire twice. You grow up in the town, you have no choice but to cede part of your identity. That’s just how it is.

Seán Kilbride grew up in Ballaghaderreen in the 1950s, the only child of two Roscommon parents. His father was a Ballintubber man – a county councillor, as it happened – and his mother came from Ballinlough. When he was about eight, his old man gave him the price of his first bit of football gear and sent him off down the town. To keep the peace, he came back with a Mayo jersey and Roscommon socks.

“The only flag in the house was the Roscommon flag,” says Kilbride. “From the 1962 All-Ireland final. My father used always refer to ‘home’ but when he said it, he meant his home in Ballintubber. I don’t think he ever really saw Ballaghaderreen as home. So I would have grown up with very strong Roscommon links and my roots were really Roscommon.

“So that was the context I was faced with when I was brought in for a minor trial in 1966. The club was playing juvenile football in Mayo and you were good enough to be asked to try out for the Mayo team. You just had no choice in the matter. You grow to accept that that’s the reality of it.”

Kilbride was neither the first nor the last of his kind in a town where the two counties thread and plait through each other without pausing for thought. When O’Mahony oversaw a St Nathy’s College team to win an All-Ireland B championship in 2000, he had players from both sides of the divide on the team.

Not only was Andy Moran on it but his cousin Derek Moran, who later went on to play a few league games for Roscommon was there too. Derek was Western Gaels, Andy was Ballaghaderreen – two clubs separated by no more than six miles and not even a county boundary between them.

The origins of the anomaly lie in the fact that Ballaghaderreen was, once upon a time, part of County Mayo. It became a Roscommon town under the Local Government Act of 1898. Stories clash as to just why this came to pass. One account has it that the Mayo local authority of the time owed a sum of money to its Roscommon counterpart and basically just handed over the bustling market town so that the people who lived there could pay off the debt through their rates.

The opposing account holds the local MP of the time felt the rates charged by the Mayo local authority were too high, certainly in comparison to those paid to the Roscommon authority and so he summarily had the boundary redrawn to place the town in the next county to the east.

One way or the other, Ballaghaderreen had a new home and that meant the GAA club of the time – Faugh A Ballagh – had to decide its future. Records show it played one year in the Roscommon championship before heading back to play in the Mayo one again, where it has stayed until this day.

Kilbride says there wasn’t very much of a Mayo-Roscommon rivalry at all in the town when he was growing up, purely because the local club was a junior club and it was rare they had a player good enough to be called up to the county team. He and O’Mahony came through within a couple of years of each other, however, and though it never caused O’Mahony a second thought – he’s always said he lives “in the last house on the Mayo edge of the parish” – Kilbride had to wrestle his conscience a little.

“I was very honoured to be thought of as good enough to play for Mayo and I was fully committed to them at every level from minor to under-21 to junior to senior. I had long since abandoned any desire to play for Roscommon because it just never came into the reckoning because you knew it was never going to be on. But there was definitely part of my mind that was conscious of the fact that my identity was very much Roscommon.”

In time, he got the chance to flesh out that identity. Life pushes you and prods you in directions you can’t always control. After his father died, Kilbride took over the family farm in Ballintubber. Although he combined it with playing for Mayo, after a while he was dropped from the panel for missing league games.

He was friends with Dermot Earley through his time being stationed in the Curragh, however, and Earley asked him would he like to join the Roscommon panel.

“Part of me was worried because it would have been seen as a controversial move at the time. But there was another part of me that was thinking that it would have fulfilled my father’s wishes in many ways. And I also felt that I would be playing for my own county finally. Of course, the first game was against Mayo.”

Kilbride went on to have a hugely enjoyable Indian summer with his adopted (readopted?) county. He picked up Connacht medals in 1978 and ’79 but missed the run to the 1980 All-Ireland final with a broken leg. He tried a comeback in ’81 but his time was up. He threw himself into Roscommon GAA and trained teams at every level. Tomorrow(2011 Connacht final), his son Senan will line out at full forward and another son, Ian, will be on the bench. His Ballagh days are long ago now.

“I don’t think the Ballaghaderreen club will ever change or be brought in to play in the Roscommon championship. But I do believe that players growing up should have a choice whether they want to play with either Roscommon or Mayo. If you grow up in a household with a Mayo sense of identity, then okay, you ought to be able to play for that county. But for those like myself who grew up in a Roscommon household with a Roscommon sense of identity, they should be allowed to choose, especially since it is in their own county.

“I think it would be good for Ballaghaderreen too. I think you would have more players getting county trials and playing at county level. Roscommon has less than half the Mayo population so inevitably there would be more players getting trials and call-ups. As well as that it would be the right thing to do. Because there is a resentment in Roscommon that the second biggest town in the county is lost to it in GAA terms, even though the town is administered by Roscommon and in every way is a Roscommon town.”

There have been a few moves down the years to either get the club moved back into the Roscommon fold or to start a new one from scratch in the Roscommon championship but they never got off the ground. For the most part, people are happy enough to rub along and see the town for what it is. A glorious quirk, an Irish solution to a question nobody but the Irish would even ask.

As O’Mahony points out, Ballaghaderreen isn’t unique. Obama’s home club Moneygall is an Offaly club playing in the Tipperary county championship and just 20 miles up the road from Ballagh itself is Ballymoe, a County Galway village whose club plays in Roscommon. But those places actually straddle borders whereas Ballaghaderreen is relatively deep behind enemy lines.

“Well, there are actually parts of the parish that are in Mayo, Sligo and Roscommon if you want to be exact about it,” O’Mahony says. “Noel Durkin, who was an All Star with Mayo in 1989 when I was manager, he’d be the last house in the Ballaghaderreen parish next to Sligo. And Keith Rogers, who played in the 2009 Mayo minor team that made the All-Ireland final, he lives in the parish of Ballaghaderreen but he actually lives in the Mayo part of it.”