Seán Moran: Some feel like the association has now been blindsided by NPHET twice 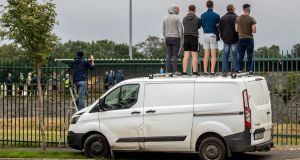 Fans look on from outside the ground during the Waterford SHC quarter-final, at Fraher Field, Dungarvan, on Sunday, before new restrictions on attendance. Photograph: James Crombie/Inpho

The GAA, like other sports bodies, is trying to finalise the impact of this week’s coronavirus restrictions by the Government on their activities. That, to an extent, is the problem. There are too many ambiguities in the simple order to play matches behind closed doors.

The anomalies have come thick and fast. People are allowed watch broadcasts of matches indoors in pubs but not sit out in the open air to watch games. Then there was word from the Department of Arts and Culture that outdoor events such as concerts and open-air theatre would still be able to retain the old attendance limit of 200.

“Don’t tell me that,” said one GAA official wearily, presumably unimpressed with the idea that such cultural happenings could hardly take place with no audience.

On Wednesday the association moved to clarify aspects of the new Government restrictions and recommended that one parent or guardian be allowed attend their child’s juvenile matches – an issue that had been causing confusion.

“While we await further clarification on the issue of parents attending juvenile games,” runs the association’s communique, “we suggest that one parent or guardian may attend a game where they consider it necessary for the welfare of their own child.”

By Wednesday night there was still confusion over what the Government policy on this issue would be, even though the association’s suggestion is in line with Tusla guidelines.

As an exercise in communication, this has all been a bit of a disaster, and the GAA’s blunt response on Tuesday night in all but demanding that the State’s acting chief medical officer produce the “empirical evidence” that supported the National Public Health Emergency Team’s (NPHET) recommendation that the association curtail its match days didn’t help the situation.

It’s possible to have every sympathy for Dr Ronan Glynn as he grapples with a resurgent pandemic, but the messaging between NPHET and the Government hasn’t been sufficiently clear.

There has been for the first time a definite rumbling that restrictions are becoming harder to sell to a public weary after six months of restrictions and anxiety.

In the circumstances, there needed to be better communication. Talking privately, GAA sources say they have been frustrated at the lack of engagement from the public health authorities.

One said that the association has been diligently doing everything asked of it and more, but had been blindsided twice now by NPHET recommendations: the first time a couple of weeks back when the hoped-for and anticipated (a Government official had confirmed as much) increase in maximum crowd size to 500 didn’t materialise, and the second time this week when even the old limit of 200 was removed.

All along the GAA’s Covid-19 Advisory Group has cautiously guided the association in the light of NPHET recommendations, and everyone had been on the same page.

The scalded tone of the request that the restrictions be explained reflects the need to be able to brief counties and volunteers on the need for measures, which is a necessary part of the “buy in” process.

Dr Glynn, who is not seen as unsympathetic to the games, having a GAA background from growing up in Claregalway and playing football, explained in a Department of Health video, which came out on Wednesday: “We’ve all seen cases in clusters linked to sporting activities, but of more concern to our public health doctors on the ground has been the number of contacts that have had to be followed up . . . as a result of socialisation around sporting activity, house parties, other social engagements and car sharing.”

Earlier on Wednesday, Minister for Communications and Green Party leader Eamon Ryan had been asked about the restrictions by Sarah McInerney on RTÉ Radio 1’s Today programme.

“The Cabinet got a similar update yesterday [Tuesday] and it’s all over the country,” he said. “Every county in the last two weeks has seen some sort of incidence. Going on memory there were about seven instances, clusters, connected to sporting events. It’s not just the match . . .

“There are health benefits around sport, and you want that, but what the health people seem to be saying – and they’re judging it as best they can, quickly – is that there is an increasing instance around sporting events, not just the event itself but the ‘before and after’, and to minimise that risk, we should restrict it to ‘behind closed doors’.”

From the GAA’s perspective this, however, is news. The association logs all of the Covid scares in the clubs and, with the tight supply of tickets, it’s impossible to imagine that non-club members would have been in attendance at events.

Another official made the point that if NPHET had data indicating a link between GAA matches and clusters of infection, could the association not have been told about it – as it would mean match-day protocols needed to be reviewed.

When asked about what many saw as the needlessly aggressive statement from the GAA on Tuesday, a different source said that it was a straightforward request that had been misinterpreted as belligerent, and that if it was a bit blunt, this was because getting NPHET’s attention has not been easy.

To an extent matters can be expected to simmer down. Club fixtures will go ahead this weekend, with Wexford hurling staging the first county final on Sunday.

Ireland name squad for conclusion of Women’s Six Nations 10:33
Graeme McDowell seeking confidence boost after tough US Open 10:21
Blow for Australian rugby union as Qantas end sponsorship 10:35
Nairo Quintana says he has nothing to hide amid doping investigation 09:25
Jamal Murray to the fore as Nuggets hold off Lakers comeback 09:02