Government resists calls from NPHET for a return to full lockdown 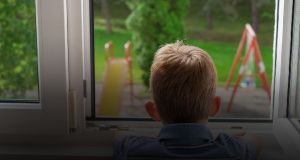 It is understood that leaders of the three Government parties and other senior figures discussed the prospect of returning to lockdown over the weekend but agreed that this could not happen, and made this clear to public health experts.

Public health experts have privately warned the Government that the country may have to return to a full lockdown if the increase in Covid-19 cases continues.

But there is strong resistance to any return to lockdown in Government with senior figures believing it would be impossible to manage.

Several senior sources, speaking on condition of anonymity, have confirmed to The Irish Times that the prospect of return to a full lockdown has been mooted during informal discussions in recent days. However, Government figures have made clear that they do not believe this option can be taken for social and economic reasons.

It is understood that leaders of the three Government parties and other senior figures discussed the prospect of returning to lockdown over the weekend but agreed that this could not happen, and made this clear to public health experts. The National Public Health Emergency Team (NPHET) did not recommend a return to full lockdown in its advice to Government on Monday.

However, senior sources say that the question of reimposing the lockdown is likely to resurface if the numbers of new cases continues to mount, as health experts fear they will.

“NPHET are certainly making it clear that if this [the measures announced earlier this week] doesn’t work, it’s back to lockdown,” said one person close to the centre of Government.

But political resistance to any return to lockdown remains strong. “They were talking about it but it won’t happen,” said another person familiar with the discussions.

Last night the Department of Health said there had been an additional two deaths and 54 cases of Covid notified. Two-thirds of the new cases were among people who are under 45 years old. This brings the total number of Covid-19 related fatalities to 1,775, and to 27,547 the total number of confirmed cases to date. The increase in 54 cases follows 190 additional cases reported on Tuesday.

The State’s public health team will on Thursday discuss the possible lifting of the restrictions on the three midland counties which were introduced earlier this month. Sources said the increase in cases appears to have been controlled in Laois and Offaly, but the figures in Kildare remained worryingly high.

Meanwhile, the Government has deferred changes to the so-called “green list” of destinations for foreign travel which were expected this week amid increasing Covid-19 infection rates internationally.

Cabinet sources say that Ministers were due to remove Greece from the list but have now decided to defer all planned changes pending further advice from the State’s public health team about the feasibility of the list.

One senior source said the decision to defer changes to the list was also driven by fears that it would present a confusing message to the public.

The 14-day cumulative cases per 100,000 of population in Ireland is now 26 and many European countries are experiencing a similar surge.

For countries on the list normal precautions apply to travel there, with no period of restricted movement expected for those arriving into the State from the destinations.

The Minister for Health Stephen Donnelly is preparing proposals on restricting non-essential travel from countries with high levels of coronavirus infections. NPHET has called for this measure to be introduced on at least two occasions.

Meanwhile, an independent expert panel on the impact of Covid-19 on the nursing home sector has recommended extra funding be pumped into the State’s Fair Deal scheme, but called for greater financial transparency from private sector homes.