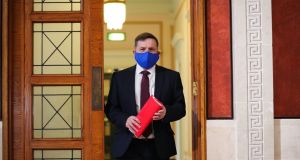 The North’s health minister, Robin Swann: could not rule out a return to a full lockdown. Photograph: Kelvin Boyes/Press Eye/PA Wire

Northern Ireland’s Department of Health (DoH) reported 34 new cases of coronavirus on Wednesday, bringing the total number of people who have tested positive for the virus in the North to 6,505.

Over the last seven days, 294 cases have been identified.

No further fatalities were reported. The total number of coronavirus-related deaths recorded by the department remains at 559.

Northern Ireland’s health minister is to recommend the reintroduction of restrictions to limit the spread of coronavirus when the Northern Executive meets on Thursday.

Measures could include a reduction in the number of people allowed to meet in a household or outdoors, or at sporting events, as well as restrictions in specific council areas where there are high rates of infection.

A recommendation to avoid public transport, as has been introduced in the Republic of Ireland, was “not something that is on the table at this minute in time”, Robin Swann said.

He said he would present a range of options based on the advice of the North’s chief medical officer and chief scientific officer.

The minister told the BBC’s Stephen Nolan Show on Wednesday he would “never prejudge” the Executive’s decision but that his recommendation would be “to take some further steps in regards to implementing some of the restrictions that we have removed in the past”.

However, he said, “if people act responsibly now we can arrest this spread of Covid-19 in Northern Ireland so we don’t have to get into the place where we need the full lockdown again but we could look at incremental measures over a period of time that can be enforced that can be relaxed as we see the spread of Covid-19 either increasing or reducing.”

The coronavirus regulations in force in Northern Ireland are due to be reviewed by the Executive on Thursday.

Rates of infection have been rising in the North in recent weeks. According to the North’s chief scientific officer, Prof Ian Young, the average number of new cases was now more than 40 per day, compared to three or four at the end of June and beginning of July.

The chief medical officer, Dr Michael McBride, told the BBC on Wednesday that the level of infection in Northern Ireland was currently at 24 per 100,000, but this concealed significant geographical variation, between less than three per 100,000 in Fermanagh and Omagh, but 55 in Mid and East Antrim.

“If we’re seeing levels of community transmission rising above 80 per 100,000 at Northern Ireland level, or at a local level, then we’re back into territory where we need to act very decisively,” Dr McBride said.

However he warned the Executive may wish to intervene before that point, “because obviously if we intervene at an earlier stage then we can prevent the excesses of some of the measures that we had to introduce before.”

Meanwhile jury trials have resumed in the North for the first time since mid-March. The trial began at Laganside Courts in Belfast on Wednesday, and the department of justice plans to open five more Crown Court venues by the end of September.

The justice minister, Naomi Long, said it had been “logistically impossible” to hold jury trials during lockdown, but a number of physical alterations had been made to courtrooms to make it possible for them to resume.

Social distancing and hygiene measures should also be observed in court buildings, and face masks worn in communal areas. “Everything possible has been done to get jury trials up and running in the safest and most efficient way possible,” Ms Long said.

“Jury trials are one of the cornerstones of our justice system, and it is a hugely significant step that we are now in a position to accommodate them again.”