‘Explicit guidelines’ needed to avoid confusion for public and those working in arts, says council 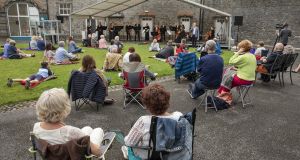 The Arts Council has called for improved clarity in communications from Government about changes to restrictions on events due to Covid-19, after widespread confusion in the cultural sector because of a lack of specifics in Tuesday’s announcement.

The Arts Council said it was “essential” that “explicit guidelines for arts activity are provided in all future communications” about restrictions, “to avoid confusion for the public and for those working in the arts”.

The National Campaign for the Arts (NCFA) grassroots organisation welcomed later clarification of the guidelines, but noted “the confusion, fear and anger felt last night and this morning across the arts and live events community”.

The “additional stress and worry through lack of clear communication was cruel and unnecessary”, it said.

It added that as guidance on arts and live events had not changed, the confusion could have been avoided if Government and the Department had officially communicated with those affected, who were “desperately trying to reignite the sector within hugely restrictive and challenging parameters.

“A number of events were forced to cancel while waiting for clarification. This is not acceptable.”

The Department of Media, Tourism, Arts, Culture, Sport and the Gaeltacht on Wednesday clarified in writing that events in controlled environments, such as cinemas, galleries and theatres with physical distancing and appropriate protective measures, “can continue to operate under existing limits”.

Current guidelines are a maximum of 50 for indoor events and 200 outdoors.

The department’s statement added a proviso “individual groupings attending these venues must be limited to six people from no more than three households”.

This led to confusion about whether a new limit of six gathering indoors, and the reduction in the maximum at outdoor events from 200 to 15, applied to arts events.

NCFA fielded anxious enquiries – over 50 emails from arts organisations and 50 Twitter direct messages – after the unclear guidelines. NCFA chairwoman Angela Dorgan said there was “panic” in the arts sector.

“The arts and events sector are making enormous efforts to innovate and deliver safe live experiences, despite the most challenging of circumstances and for the most part at great financial loss.”

The NCFA recognised the pressure Government departments are under, but said “the arts continue to be side-lined when announcements are being made, which further erodes confidence, goodwill and security”.

Government press conferences on Tuesday and Wednesday made no reference to “professionally staged arts experiences and live events. It is difficult to understand how the Government overlooked the inclusion of specific information to allay concerns within the sector that is most affected by restrictions on gatherings.”

The Arts Council statement welcomed the Department’s clarification that numbers remained unchanged, and also observed “the in-depth professionalism of the arts sector equips it well to restore public confidence in attending live events in a safe, responsible and enjoyable environment”.

A limited number of indoor and outdoor performances of music, theatre and dance, with extremely limited numbers and careful safety protocols, have marked the start of a return to live performance.

Dorgan estimated 200 indoor arts events are planned over the coming days. “People are really trying to bring audiences back out albeit under Covid restrictions. They were hoping to get ready for a winter of doing things differently, and this could have meant a whole other pivot again if it was going to be 15 indoors and nobody outdoors,” she said, if sports behind closed doors rules had also applied to arts events.

Among those tweeting concern on Tuesday evening about where they stood regarding events this week were Blue Raincoat planning Yeats’ On Baile’s Strand on Cummeen Strand in Sligo, Waterford Youth Arts, rehearsing an outdoor play, and Dublin City Council’s Opera in the Open.

Others voiced concern that the sector had been forgotten again, and suggested the government “just give time to differentiating between a gig, or a show in a controlled environment and a party or a gathering”.