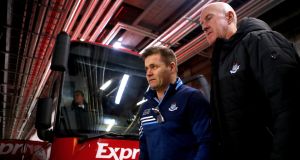 Paul Clarke (right, alongside current manager Dessie Farrell) was one of the links with Jim Gavin’s five-in-a-row All-Ireland winners.

There has been a shake-up in Dublin football manager Dessie Farrell’s back-room team. Paul Clarke, one of the links with Jim Gavin’s five-in-a-row All-Ireland winners, has stepped away from the team management and Ballyboden St Enda’s Director of Coaching Brian O’Regan has joined.

Clarke has a long record of service with the county footballers, having captained the All-Ireland minor winners in 1984 and in 1995, added a senior medal. He was well regarded as a developer of young talent and took charge of the development teams that competed in the O’Byrne Cup in recent years when the senior team was on holiday.

It is understood that he had been working as a defence coach in Farrell’s new management and there was no elaboration on why he decided to leave.

Players had been informed last week that O’Regan would be joining the county set-up.

Clarke’s is the second high-profile departure from the All-Ireland champions this summer after former Footballer of the Year Jack McCaffrey left in June.

It has been a disrupted first year for Farrell with the Covid pandemic destroying the season but in a month’s time county teams will return to training in advance of October’s return to play, which begins with the final two rounds of the league Division One campaign, against Meath and Galway.

Their first championship match is against Westmeath.

Meanwhile, the GAA will hold a Central Council meeting on Thursday. Described by officials as ‘a housekeeping operation’ it takes place in a discouraging context with Kildare, Laois and Offaly in lockdown and most counties facing financial difficulty in fielding teams for the upcoming provincial and All-Ireland championships.

That difficulty was exacerbated last week with the news that Phase 4 of the exit from national lockdown had been again postponed and with it the raising of maximum attendances from 200 to 500.

That obviously impacts on the inter-county season due to start in little more than two months’ time both in terms of what would effectively be a ‘behind closed doors’ restriction on the matches and also the current difficulties counties are experiencing in raising their own revenues.

The three midland counties, subjected to special restrictions for at least two weeks from last weekend, have had to re-schedule their county championships given the impact of the cessation of matches – which will cover three weekends if the scheduled 16 days isn’t reviewed.

Not going to a new limit of 500 has hit projected revenues quite hard, as the additional 300 would be purely profit given that the current 200 has to include players, officials and media. That lost 300 at €10 per head represents €3,000 per match.

There’s unlikely to be a full accounting for projected losses in the light of the new restrictions for another few weeks but with county teams due to resume training on September 14th the matter will become urgent before too long.

GAA sources say that the Government is very keen for the provincial and All-Ireland championships to proceed.

It is increasingly likely though that some sort of Government assistance will be needed to ensure that this happens, as the restrictions imposed by NPHET (National Public Health Emergency Team) and the Government in the interests of public health have severely compromised the GAA’s ability to stage the matches.

Whereas the Department of Sport announced in June a Covid relief package of €40,000,000 to be shared between the GAA, FAI and IRFU, the precise grants won’t be finalised until October. It would be the contention of the GAA that such funding would be separate from that needed to help the championship to go ahead.