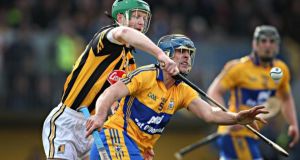 Laois v Cork, O’Moore Park, 7.0 [Live, Setanta Ireland] - Cork are about as regretful as you can be after one match in the league, having stalled on the golden opportunity to take two points from their biggest rivals for promotion after Limerick were reduced to 14 for nearly three quarters of the match last weekend. Jimmy Barry-Murphy makes an industrial eight changes for the trip to take on Séamus Plunkett’s side, who got their season off to a flier by beating Offaly. Cork could do with being more disciplined than they were against Limerick, as Stephen Maher will punish them much as Shane Dowling did. None the less it’s a strong Cork side and they should pick up their first win.

Dublin v Clare, Parnell Park - Manager Anthony Daly’s not sure that even if Dublin were at full tilt last week, they’d have beaten Galway but they certainly would have gone down with more decorum. Daly has injury concerns for tomorrow’s visit from the All-Ireland champions with Paul Ryan definitely out and question marks over a couple of others. David Fitzgerald is coming off a fine week, clipping Kilkenny by a point last weekend and then organising LIT’s Fitzgibbon coup against neighbours and Cup favourites UL. He talked down Clare’s chances in this match, arguing that they couldn’t get as ‘up’ for every match as they did a week ago in Ennis but there was some great play by the team in alien conditions. Dublin struggled all over the field but were particularly out-played on the line that had been the source of greatest strength to them last year, the half forwards. They will certainly raise their game but will it be enough?

Kilkenny v Tipperary, Nowlan Park - Tipperary caused surprise by how conservative Eamon O’Shea’s selection was for the opening match against Waterford. In the event it was enough but only after a goalkeeping error had ushered them home. There’s just one change for this trip to Nowlan Park, scene of two memorable encounters last year and with it the unresolved sense that the team need to be developing broader options. Kilkenny have been trying to do just that and there was no mistaking the frustration at losing by a point to Clare after a match in which plenty of goal chances were created. Having Henry Shefflin back and hungry for action was an undeniable positive but having him at 35 so conspicuously the best player must create some ambivalence. Still, they got stuck in and that looks likely to be enough here, making it all the more vital for Tipperary to find a response.

Waterford v Galway, Walsh Park - Both teams did better than expected in their opening matches. Galway coped with the Portumna players and gave a fired-up display that looked better than anything they delivered last year. Iarla Tannian looked the part at centre back, as did young Pádraig Brehony at centrefield. Both would have understood that more searching tests are on the agenda than a lack-lustre Dublin could provide. This promises to be one of them. Waterford have a great record against Galway and played so whole heartedly in Thurles that they would be optimistic about maintaining it. Continued struggles in attack however, especially when set against the loss of Maurice Shanahan with injury, will hinder them if the visitors’ octane levels are understandably lower.

Wexford v Offaly, New Ross - The important thing for Wexford was to get the win in Antrim and they just about managed it having had to survive more than half the match with 14 men. Keith Rossiter is injured but Offaly manager Brian Whelahan has his own injury problems and with only two starting forwards scoring from play against Laois, they’ll need to step up the threat. Home win.

Limerick v Antrim, Gaelic Grounds - Limerick showed impressive grit and work rate to recover Cork’s six-point lead and one-man advantage in the opening match. Antrim however left their run a little too late and ran out of road against Wexford. TJ Ryan and Donal O’Grady make a few changes but the home side at full strength should be too much for Kevin Ryan’s team.

Connacht v Ulster, Tuam, 2.30 - Despite serving up a couple of cracking matches the semi-finals attracted virtually no public patronage but there will be interest in how this pans out. Connacht famously haven’t captured the competition since 1969 and take on the modern masters, Ulster who once again delivered a big performance in adversity when seeing off Leinster in extra time. It would be nice to see the title go west again but the cohesion and commitment of Joe Kernan’s team will be hard to overcome.

1 Matt Williams: The economic earthquake for European rugby is coming
2 Cheltenham faces criticism after racegoers suffer Covid-19 symptoms
3 Premier League 2019/20: End of season (for now) report card
4 Pat Critchley: ‘You teach or coach the person first and the subject or the game second’
5 Ian O’Riordan: Learning to run for the first time all over again
Real news has value SUBSCRIBE

Matt Williams: The economic earthquake for European rugby is coming 07:00
Sporting Poetry: Seeing far beyond the scoreboard 06:00
Pat Critchley: ‘You teach or coach the person first and the subject or the game second’ 06:00
Premier League 2019/20: End of season (for now) report card 06:00
Ian O’Riordan: Learning to run for the first time all over again 19:24
Here is your handy guide to sport on television this week