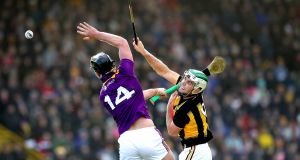 Only mad dogs and hurling men go out in this sort of weather.

Storm Dennis blew through the fixtures list and left a select few games hanging on by the tips of their fingers and nothing more. At times, players didn’t know whether to swing their hurleys or attach sails to them. We can take it the significance of the middle weekend of February will be slight enough come summer.

Which is not to say it wasn’t enjoyable.

At Wexford Park, a crowd of 7,200 finished the afternoon with a thundering wave of haroo as the final whistle went on a 1-16 to 1-14 win for the home side over Kilkenny.

Davy Fitzgerald’s side are unbeaten now in six games against their old tormentors. You can say the league is the league and that’s fine. But changing Wexford’s reality against Brian Cody’s team has undoubtedly been a huge factor in driving Wexford to a higher plane in general. No harm to keep on keeping on.

“One hundred per cent, I have always said that,” said Fitzgerald afterwards.

“I probably respect Kilkenny more than anyone, for the way they apply themselves. Even when they have changed their team over the last number of years, they have never been far off the mark. The respect I have for Brian Cody is incredible. He keeps bringing back team after team. I know that he’ll be back for more. That’s what keeps me going. I love that battle, that challenge more than anything.

“We know what’s coming in June. It’s funny, that’s all that’s in my head right now, playing them in Nowlan Park. You know when you play Kilkenny, every day is an unbelievable day because they are going to give 110 per cent. You see that with Kilkenny-Wexford battles, especially over the last three years. Nip and tuck, all the time. I love that. That’s why I’m in this thing – I want them battles. I know what they’re going to be like in June. He won’t want to go a seventh one. He’ll want to get the victory. But we’ll look forward to that when it comes.”

There was nothing pretty about this one. Wexford took a seven-point lead into half-time and it looked like nowhere near enough, given the gale they had at their backs.

Kilkenny wiped it out and had gone ahead themselves by the 52nd minute. Fitzgerald sent on Lee Chin, Rory O’Connor, Diarmuid O’Keeffe and Matthew O’Hanlon as the second half progressed to dig it out for the home side, to a raucous reception from the faithful at the end. They know a win over Kilkenny is worth far more than the two points on the board.

For Cody, it was the sort of day where asking him about the game was only ever going to get his stock-in-trade, hurling-is-hurling response. So we broadened things out and asked him about the black card proposal that’s headed for Congress. It will hardly come as the shock of the day to find he is not enthusiastic about it.

“I certainly don’t know where it’s coming from, it’s something that’s brought into football so it has to be brought into hurling then, it seems. I have absolutely no understanding why there’s a black card being talked about even. The rules are the rules, you are fouled you get a free, end of story. Hasn’t changed. It's hilarious, you know?

“Look, you are put on a committee for rules or revision or whatever you want to call it in Croke Park now and you are supposed to justify your existence by saying, ‘We’ll come up with a brainwave’. To me that’s not a brainwave. I’m saying it a long time, I wish they’d leave a very, very good game alone.”

Elsewhere, Cork withstood a game performance from Westmeath to run out 3-12 to 1-14 winners at Cusack Park, needing two Patrick Horgan penalties to do so. And Clare were much too good for Laois in Ennis, running out 0-17 to 0-9 winners to top Division 1B after three games.

Meanwhile, in football, Cavan upset the Division Two formbook with 3-10 to 1-6 win over Laois in O’Moore Park. Two goals from half-time sub Stephen Murray helped to jump them from last place to second in a division that looks knottier than ever. Laois only managed three points in the second half with the wind behind them, putting a halt to what had been a promising start to the spring for Micheál Quirke’s team.