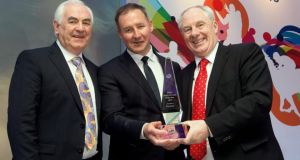 In a reverse of 1995, Dublin football manager Jim Gavin saw off Clare hurling manager Davy Fitzgerald for the Philips Sports Manager of the Year award yesterday.

Not that either man cares or sees individual accolades as motivation to drive their respective counties to the promised land in 2013.

But still, we do and this is time of year for it.

In 1995 the gregarious Ger Loughnane was honoured, having ended Clare’s 81-year wait for All-Ireland success, at the expense of Dr Pat O’Neill who that year guided Dublin to the Sam Maguire.

Yesterday, the main award, at a ceremony in Dublin’s Shelbourne hotel, remained in the city for the first time since Kilkenny’s hurling manager won the inaugural prize way back in 1982.

It makes sense. Gavin took on the senior managerial role after double All-Ireland success at under-21. Clare’s remarkable rise under Fitzgerald, to capture Liam McCarthy, while epic, was eclipsed by Dublin winning the National League – for which Gavin was honoured with April’s monthly award _ the Leinster title and finally the defeat of Mayo in September’s All-Ireland decider.

“It caught me a bit off guard this afternoon with so many fantastic managers here,” said Gavin, who in keeping with his normal humble manner immediately divvied up the achievement.

“Listen, I’m very humbled to get it. I didn’t expect it but now that we have it it is testament to the management team in Dublin. It’s not only myself, it is Declan D’Arcy, Mick Deegan, Shane O’Hanlon, Michael Kennedy and a host of guys in the backroom who are there to facilitate guys and their ambitions.

To work
“It was a pleasure to work with the 2013 Dublin senior football team and to see the success they so desired.”

Any questions of comings and goings from his panel ahead of the 2014 defence of their titles was deflected by Gavin noting the panel have been denied the opportunity by the GAA to meet up as a squad until the end of the year.

Another reason Dublin’s manager saw off the cream of Irish sporting mentors was the stylish manner in which his team plays.

“We do ask the players to go out there and express themselves and play a particular style of football. That’s not going to change radically, we have our core principles and this year brought us success.

“There are no guarantees for 2014 but we won’t stray from the core principles the way we see Gaelic football should be played.”

Yesterday was the first time a GAA manager was honoured since Tipperary hurling, under Liam Sheedy in 2010.

The last Gaelic football manager to win the prize was Tyrone’s Mickey Harte in 2005.