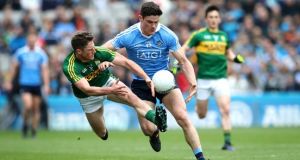 Anyone who is tired of constantly hearing Dublin-Kerry matches being described as classics can probably stop reading. Sunday’s Allianz Football League final ebbed and flowed from cagey beginnings, picked up current in the second quarter as Kerry made their bid for supremacy and ended up in full torrent as Dublin resisted mightily the dying of their remarkable 36-match unbeaten run.

Kerry led by five on three occasions in the final quarter and the Dublin supporters in the crowd of 53,840, fed a recent diet of Dublin’s refusal to panic and ability to survive apparently anything, began to shift uneasily as they awaited the accustomed late rations.

Lo and behold, they looked to be on the way. Paul Mannion, in for Paddy Andrews, intervened in the 62nd minute. He finished a mesmerising move, begun when David Byrne just kept in play Stephen Cluxton’s kick-out and in a surging move the ball travelled between Ciarán Kilkenny, Michael Darragh Macauley and Bernard Brogan before Mannion stepped into the scoring position to tuck the ball into the net.

The ground was electrified and with everything at stake in the attack and counter-attack that followed, the final went breathtakingly to the last kick of the match, a free from just beyond the 45 which Dean Rock bent in towards the Hill, which has overseen so many legendary scores in this epic rivalry, but it struck the post, rebounded into play to the accompaniment of the final whistle.

So, the record went and for once Dublin couldn’t come back from the dead. It was Kerry’s first league since 2009 and the first that Jim Gavin hasn’t won since taking over Dublin five seasons ago.

Dublin have generally managed to escape the worst consequences of Connolly’s indiscretions in the past but this time it would hurt Jim Gavin’s team.

It was one of those contests which end up suspending critical analysis, a compelling sequence of possession, attacking movement, scores and wides repeating on a quickening loop.

Kerry deserved the win. Of all counties they were likely to hold their nerve when the chance to win the match and depose the four-time holders was there. Dublin had escaped when the teams played in Tralee, just as they kept doing throughout a league campaign when they relied more often on their powers of recovery than on the clear domination of opponents.

Eamonn Fitzmaurice’s team included five of the county’s rising generation of future stars, none of whom had featured 12 months ago when Dublin ran out easy winners in last year’s final.

That energy and belief charged the team and with galvanic performances from established names such as David Moran, whose best form is clearly returning, and All Star Paul Geaney, who built the critical third-quarter lead that kept the holders at what eventually turned out to be an unbridgeable distance.

Kerry had in recent years struggled to impose themselves at centrefield since the arrival of Brian Fenton two seasons ago but there was no confusing who was the biggest influence this time, as David Moran gave the stand-out display, getting forward for a couple of points kicked under huge pressure, the second of which restored a three-point lead for Kerry after Dublin’s late revival.

Earlier in the 22nd minute, Moran had in a one-on-one situation drawn an excellent save from Stephen Cluxton.

The first half followed familiar patterns for the most part. Dublin looked better but there wasn’t much in it on the scoreboard and they led by just one at the break, 0-10 to 0-9. The All-Ireland champions might have hoped for better as they had begun to stretch their lead before things went wrong in the 10 minutes before half-time.

Kerry may not have wreaked the havoc of last August before half-time but the match took a turn for the worse for Dublin all the same. Diarmuid Connolly had just been showing signs of hitting his stride and in the 27th minute a penetrative run through the middle was halted when Jonathan Lyne pulled him down with a high challenge.

Referee Paddy Neilan, who despite concerns about his inexperience had a good match, had no hesitation in issuing the black card. Unfortunately for the Dublin forward, three minutes later he was taking the same walk - just a week after incurring a similar sanction against Monaghan - after pulling down Gavin Crowley, the Kerry replacement who had come in for Lyne. Dublin have generally managed to escape the worst consequences of Connolly’s indiscretions in the past but this time it would hurt Jim Gavin’s team.

It’s hard to know whether Dublin’s faith in their end-game reputation had become so fervent that it undermined their will to compete in the third quarter but they were comprehensively out-played, as Kerry poured forward, their half backs running relentlessly in support.

Dublin’s defence lacked urgency at times, losing possession needlessly and conceding avoidable frees but they did well in the 58th minute to keep a clean sheet. Cluxton saved first from Tadhg Morley and when Kevin McCarthy was closing on the rebound, Philly McMahon managed to get in the way and block the ball out for a 45, which Moran missed.

In the finale Dublin threw everything at the Hill goal but it simply wasn’t to be their day. Kevin McManamon, so long Kerry’s tormentor in this fixture, bustled in on goal in the 73rd minute, his team two points down but his deft flick inside didn’t reach its target and Dublin had to be content with a point rescued by Rock.

The outcome is a great tonic for the championship, sending Dublin back to smart over the loss of a trophy and firing up Kerry’s emerging team. Everyone else has to stay in touch with the two of them but the most important aspect of any competition has been reinforced: no-one’s unbeatable.