Donal Óg: Sliotar manipulation always been a part of hurling 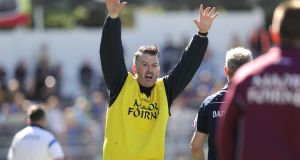 After politely declining to comment on the ‘sliotar gate’ incident that emerged from Clare’s Munster hurling final defeat to Cork on Sunday, Donal Óg Cusack then proceeds to offer an education on the why, how and what it was all about.

Because manipulating or disguising or somehow even trying to discard the sliotar – such as Clare did on Sunday – is certainly nothing new, and no one knows this better than Cusack. Cork’s three time All-Ireland winning goalkeeper, now a coach with Clare, says players at all levels have being doing it for years, and will continue to do so until the GAA enforce the standardisation of sliotar manufacture.

“As long as there isn’t a standard sliotar, go to any goalkeeper, or any player, and they will still bring their own,” says Cusack. “And every club in the country is at it too.

“Calibration is the wrong word, but you are calibrated to the ball you are using. And if you puck out one ball, the ball coming from the other side could be totally different.

“I remember being a minor, we’d a bag of balls, and the rims on these were huge, so I said ‘no way, we’re using our own sliotar’ . . . And the steward came over and actually took those balls off me. And I could tell you another hundred stories similar to that.

“So a standard ball is the way to go, but of course it should evolve. I also think the ball is the wrong colour, it should be a luminous colour for example. Or look at putting dimples on the ball, to give better traction, stuff like that. I’ve spoken with Pat Daly, in Croke Park, and he is very strong on it too.”

In the 1999 All-Ireland final, which Cork won, Cusack also reckons his bag of sliotar were interfered with: he also recalls the 2005 Munster hurling final, against Tipperary, when the Cork team hatched a plan to replace the ball should the opposition win a penalty, which they did.

“We actually practised it, that if there was a penalty given, one of us would cause a diversion, give out to the ref, and roll in another ball, strike the other one away. I remember looking at Eoin Kelly (from Tipperary, who took the penalty) thinking ‘that ball is not going to go as hard as you think it will go, and Eoin has said it himself, since. And yeah, we saved the penalty. Now he didn’t hit a bad shot in fairness.

“But that’s one incident. Go back to Babs Keating, whoever. Or the drying of sliotars. But my argument was that until everyone is playing by these rules, I’m not playing by them.

“And when I was playing I’d file off the rims, to take the edge off them, because I wanted that consistent ball all the time. And if I found a nice ball in training I’d always keep that.

“Even when I was with The Sunday Game I saw things happening in the championship a couple of years ago, a huge deal, watched it, and no one else picked it up. So I said nothing about it.”

The balls should facilitate a higher quality of play, because part of our game, the beautiful part of it, is the passing

The GAA license a number of different sliotar manufacturers, and have moved to enforce their standardisation of production from next year: “Every ball I see has an official stamp, but some balls will travel 20 or 30 yards further. Some waver in the air. So I’d fully support the standardisation of ball. And why do we need such big rims? Just because we used the same ball 50 years ago.

“The balls should facilitate a higher quality of play, because part of our game, the beautiful part of it, is the passing. Even for young kids, picking up the ball, it’s proven the eye reacts faster to a luminous ball, and if that’s one small percentage who might pick up on it faster, we should go for it.”

Clare have since formally apologised to the Cork county board for the incident on Sunday after video footage emerged of a member of their backroom team throwing a bag containing goalkeeper Anthony Nash’s sliotar into the crowd: it is understood that the individual is related to a member of the backroom team, and known to Clare, and a Clare spokesman said on Wednesday that joint team managers Gerry O’Connor and Donal Moloney are “extremely disappointed with what happened, and that it should never have happened.”

Speaking at the launch of the new Electric Ireland minor championship star awards, Cusack said in no way were his loyalties tested during Sunday’s game.

“I just wouldn’t have that capacity. I know it would be better if I said ‘yeah, I was’ . . . but I was honoured to coach these (Clare lads), my mind is focused on that only.”

He also stood over his comments made in 2014, that Cork’s underage structures were in crisis at the time: “Like everyone in Cork, we were concerned with the facts of the results, but like anything else, if you’re going well underage, and the minors with Cork last Sunday were a perfect example of that, it can only auger well for the senior team. At that time, looking at that, I was a concerned Cork man, looking at the results underage.”

Reflecting on Cork’s re-emergence this season, and the comparisons with their 1999 All-Ireland success when Cusack also featured, he said: “It’s a good story, but no, when I was playing for Cork, we always had that belief, that this is what we should be doing in terms of winning.”

1 Gordon D’Arcy: Where is Ireland’s progress under David Nucifora?

Jürgen Klopp impressed with ‘top talent’ Caoimhin Kelleher 06:49
Gordon D’Arcy: Where is Ireland’s progress under David Nucifora? 06:00
Johnny Sexton hopeful he will play on until the next World Cup 06:00
Darragh Ó Sé: Managers have steered three contenders to a better place 06:00
Seán Moran: Waterford give hurling an underdog story of its own 07:09