GAA Statistics: What makes Down so great to watch? 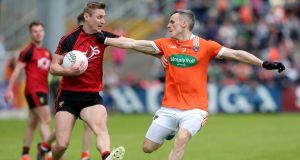 Down are surely the most enjoyable team to watch in this year’s championship.

Yes, Éamonn Burns’ team brought a huge level of aggression and want to their shock win over Monaghan in the Ulster semi-final, but some of Down’s attacking play was a throwback to the class of 2010. Or even, the great teams of the 1990s. And that was a joy to see.

A county steeped in tradition, five All-Irelands and 12 Ulster titles, when the confidence is flowing Down play direct, with speed, flair and intent. What’s not to like.

They registered 14 straight turnovers against Monaghan

Against Monaghan, Down kickpassed almost one in every four possessions (23 per cent). While 45 per cent of their possessions were either hand or kick passed in a forward direction.

Mixed with their rediscovered aggression, game management and fitness levels – they registered 14 clean turnovers against Monaghan – Down are all of a sudden, back.

It’s all about peaking. Last Sunday Roscommon won the Connacht championship with a nine point win over Galway - three and a half months after finishing bottom of the league with six defeats and an average concession of 1-18.

That same weekend, as Roscommon signed off their Division One relegation with a solitary win over Cavan, Down rescued their Division Two status with a draw against Cork.

The two teams would meet in a keenly contested challenge match in Dublin soon after as they both began to seriously up the ante in preparation for the real McCoy. The championship.

Lessons learned. A year previously Roscommon had burst into Division One with wins over Kerry, Cork and Donegal. All by the first week of March. They would go on to take a heavy beating against Kerry in the league semi-final, before losing that year’s Connacht final replay by 11 points, and then dropping out of the championship after a 2-12 to 1-9 loss against Clare.

A year earlier this young Down team looked to be coming of age as they topped Division Two of the league. Second top scorers in the four divisions.

They lost that year’s league final, to the Rossies, 1-17 to 0-15. Before losing to Derry in the Ulster championship, and crashing out of the qualifiers after a five point defeat against Wexford.

Both Roscommon, this year in particular, and Down over recent seasons have lost key players. They do not have the squads to compete strongly, never mind at full-tilt, in both the league (higher Divisions) and championship.

They have seemingly sacrificed one entirely, to absolutely explode into the other.

Caolan Mooney had 19 possessions in the semi-final, made a great block, caught a kick-out and gathered the breaks for three others

Down are now reduced to just Conor Maginn and Kevin McKernan from the team of 2010, which reached the All-Ireland final and went on to be a solid Division One team.

Yet the likes of Caolan Mooney and Niall McParland are Hogan Cup winners with St Colmans, Darragh O’Hanlon and the Johnston brothers, Ryan and Jerome, are a part of one of the province’s strongest clubs in Kilcoo.

What most of those players have in common is raw pace. McKernan was man of the match against Monaghan and Tyrone will look to marshall him. A key player who may be allowed more space from deep though is former AFL rookie Mooney.

Mooney had 19 possessions in the semi-final, made a great block, caught a kick-out and gathered the breaks for three others. Four missed shots let him down however. Against Armagh though he scored 0-2. If he can combine the two performances then Tyrone will be in bother.

It’s the pace and energy of him, McKernan and these lads in defence, twinned with the movement of the forwards and their ability to find one another with angled passes that makes Down tick. But it all stems from that initial injection.

Against Monaghan, Down were averaging just two passes in the build up to their scores from play. When they are at their best they are super direct, always looking to get by the man, into space and find a team-mate beyond them in space.

As impressive as this is, Tyrone will be back in numbers in Sunday’s Ulster final and so Down will need to do better when they are slowed down and forced into the contact.

In O’Hanlon they have an excellent free-taker, from distance and close-in. Down need to be able to generate scoreable frees from these slowed down situations, and also convert their shots from outside of the scoring zone (against Monaghan five of their seven scores from play were outside the scoring zone).

Because if they are turned over, we know how slick the Tyrone transitions are on the counter.

Another area which threatens to cancel out all of their positive play is the kick-out. Considering the 1-3 Galway conceded directly from misplaced kickouts against Roscommon, and the goal Monaghan conceded against Down, there’s certainly logic in going long with the kickout as Down did 41 per cent of the time against Monaghan.

Not all goalkeepers are made for the short game when the press is on.

It also suits their direct, high energy approach. But they must keep it away from Colm Cavanagh. Kieran Hughes had two marks last time out as Down edged the kickout battle (23 to 21). They are unlikely to have the same joy if the ball is constantly landing under Cavanagh.

Get those things right though and Down, playing a modern adaption of the Down way, will take beating. And we’ll enjoy watching them.