Dublin SHC Final: Cuala put to the pin of their collars by St Brigid’s 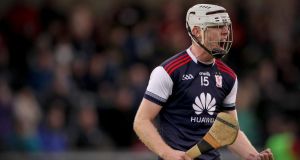 Cuala’s Colm Cronin celebrates at the full-time whistle after his side’s victory over St Brigid’s in the Dublin SHC Final at Parnell Park. Photograph: Oisín Keniry/Inpho

Cuala are old hands at this gig. As spectators clicked and clacked their way into Parnell Park through the turnstiles, each one of their supporters was offered a free red flag to wave in anticipation of what was to come.

Yet, that sense of expectation was to endure a rather nail-biting time of it, as St Brigid’s – with Taoiseach Leo Varadkar taking his place in the VIP seats to support his constituents – fought the good fight right to the final shrill of the whistle before Cuala’s army of supporters got to do any flag-waving with any degree of enthusiasm.

In the end, Cuala’s nous and experience stood to them as the Dalkey club claimed a fourth Dublin senior hurling championship title in five years. Even robbed of the services of Con O’Callaghan for the vast majority of the match, after the full forward’s only contribution was a third-minute goal which ended in agony for him after clashing with Brigid’s goalkeeper Alan Nolan in the act of scoring, Cuala won the battle of attrition over the Blanchardstown side, who were reduced to 14 men in the 53rd minute when Kevin Callaghan was red-carded for an off-the-ball incident with substitute John Sheanon.

Brigid’s, chasing a first county senior hurling title, gave it their all. On the receiving end of a 19-points loss to Cuala in the group stages earlier in the campaign, Brigid’s set out to deprive the favourites of space and, to a man, crowded into rucks with a zeal that was very much on the edge. It ensured referee Thomas Gleeson was kept busy, with frees dominating the exchanges between the sides.

O’Callaghan’s goal was the first score of the match. His medical team worked for four minutes on him behind the goal before admitting defeat to the dead leg. It came after a wonderful long pass in from defender Oisín Gough and O’Callaghan was his deadly self in dispensing to the net only to pay a high price in coming out of the wrong end of the collision with the advancing Nolan.

Cuala never trailed thereafter, but they were put to the pin of their collar. Brigid’s trailed by three points with three minutes of the first half remaining but went in on level terms after Luke Purtill and Keith Mullally from play and Paul Winters’s free gave them momentum to finish the half.

If the second half initially saw a continuation of tit-for-tat scoring, Cuala gradually assumed control. David Treacy’s free-taking was sublime for the most part, but there were other scoring contributions – most notably from the hugely impressive wing back Seán Moran – as they moved into a 1-13 to 0-10 lead in the 48th minute.

And that is when Brigid’s struck, with Cian O’Sullivan making a spectacular high catch before zooming in with only a goal on his mind. His thunderous shot was saved brilliantly by Seán Brennan, only for Mullally to follow up and slam to the net. Brigid’s response to Callaghan’s dismissal was to up their game and there was only a point between the teams in the 56th minute before Cuala finished with three successive points – one from Moran and two frees from Treacy – to close out the game.

Treacy, who contributed 12 points, all from dead balls, to Cuala’s cause, admitted: “It wasn’t easy, not one bit easy. We have played Brigid’s for years and we always know what we are going to get. They are very fit, very well organised. They didn’t let us play our game plan for a lot of the time.

“Today was a combative game, blow for blow; one of those games that’s very, very physical. I’m just happy that the [free taking] averages were higher than usual,” added the sharpshooter.