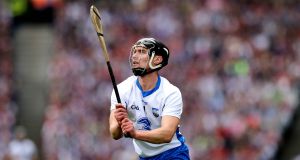 Pauric Mahony: must have felt that he had slain every demon of self-doubt in his body in the last four months only to experience a dreaded off-day in the Munster club final defeat to Na Piarsaigh. Photograph: Ryan Byrne/Inpho

Ballygunner ended up losing the Munster club hurling final by eight points on Sunday, but anyone watching knew it was a far closer struggle than that.

It certainly stretched credulity that they were only a point ahead of Na Piarsaigh at half-time. But part of the reason came from a most unlikely source – an off-day from placed balls for their intercounty man Pauric Mahony.

The role of the free-taker is a pretty thankless one. It can often be a long apprenticeship between becoming a free-taker and becoming a trusted free-taker, and longer again before you are accepted as a player worthy of a place in the team for anything other than free-taking.

For years, Mahony had struggled with that progression. Everyone has off-days from placed balls, but when your team doesn’t win those misses are magnified. Seamie Callanan and Joe Canning both missed scoreable frees in the All-Ireland semi-final this year, but Tipp people remember those misses a lot more readily.

Mahony has consistently suffered in comparison to the other really top free-takers in the game – Callanan, Canning, TJ Reid. His misses from placed balls were often magnified because he wasn’t contributing as much as those three do from open play, an ante-room to the inner sanctum that he shares with pretty much every other hurler in the business.

But this year was different. In another year he would have been a cert for an All-Star. He hit 0-19 in the All-Ireland semi-final and finals alone, and almost a third of those scores came from play. When you contribute from play to that extent, a certain amount of leeway is granted to miss one or two placed balls. When the impression is that you’re not contributing in the ebb and flow of the game, no such leeway exists.

If performing on All-Ireland final day is the last hurdle a player should face in the seemingly endless search for self-confidence and affirmation, then Mahony, even in defeat, should have been bulletproof. He had a stormer in the final, ending up with a personal tally of 0-11, with three from play, off Gearóid McInerney no less.

He has in the past been accused of being peripheral, but on the biggest occasion of his career he was peripheral in the very best sense of the word – in that he knew when to step out of the madness, find himself some space, and nail a point from distance.

So surely he could go back to his club with his chest out after that. And, right enough, he went on to top score for them in their county final win over De La Salle, then hit 1-11, 0-5 from play, against Thurles Sarsfields in the Munster quarter-final, and another 11 points against Sixmilebridge in the semi-final.

All of which makes what happened on Sunday even more confusing. He scored one point from seven frees, which is scarcely believable for a club free-taker, let alone one of the very best in the country. So what the hell happened?

What happened is unfortunately what happens to even the very best. Free-taking is an extraordinarily lonely business. When Ballygunner looked to him to stitch the scores together that would help reflect their dominance on the scoreboard, he was found wanting. And wides from frees are not like wides from open play.

In-built into the schema of every team is the admission that you’ll miss a few from play – that’s just the way of things. But the ‘expected points’ ratio (to paraphrase a term from soccer) for placed balls is necessarily higher. You bank on your free-taker to get most of them. When your free-taker doesn’t hit the ones you expect him to hit, you don’t feel like it’s a chance missed – you feel cheated.

The sinking feeling when your dominance isn’t being reflected on the scoreboard spreads like wildfire. And when you’re a high-profile guy like Mahony, then once you jog out to hit one, no matter if it’s 100 yards from goal, people are expecting you to nail it.

Even watching him from afar, his reaction to that series of misses was surely half anger, half bemusement. He must have felt that he had slain every demon of self-doubt in his body in the last four months. And then, in his last game of the calendar year, he was left looking from his hands to his hurley as if they’d never met before.

I took a few frees in my time, and always marvelled at how my output from play went through the floor if I was having a particularly good day from placed balls. It’s almost as if getting stuck in is antithetical to the calmness required to hit frees. And on those off-days, as you race around in open play trying to make up for the missed frees, your composure goes to pot completely.

That might explain Mahony’s mishaps on Sunday. Saying you’ve just had ‘one of those days’ is anathema to the modern athlete, but maybe it’s just part of the deal. Eventually the game catches up with you – all you can do is pray it happens on a day you’re not needed.