Ciarán Murphy: Donegal-Dublin does away with idea of fairness 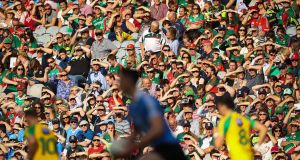 In light of recent events, it’s probably not that much of a surprise to see Donegal chancing their arm this week. Their recent statement in relation to the first weekend of the GAA’s new football championship experiment, when they play Dublin in Croke Park on Saturday evening next, says that they hope to sit down with the GAA “to seek clarification on how any county may use a ground as both {a] neutral and a home venue”.

“The intention of the meeting is to ensure a level playing field for every team who will qualify for the All-Ireland quarter-final group stage and ensure that no team has any advantage over any other team.”

The fly in this ointment is that nowhere does the original motion that passed at Congress mention a neutral venue. It mentions one home game, one away game, and one game at Croke Park. This escaped many people’s attention, including many of those of Congress apparently, but there it is.

It wouldn’t be an issue if Dublin hadn’t qualified for the Super 8s (a name that I know many in Croke Park aren’t that wild about – maybe Donegal felt they’d have more chance of actually getting their meeting if they used the phrase “All-Ireland quarter-final group stage” in their statement).

But we can all say with a large degree of certainty that Dublin will be around for the next few iterations of whatever it is you want to call the upcoming round-robin phase – the GAA can hardly claim to be blind-sided by the recent upturn in Dublin’s footballing fortunes.

Pretty much everyone else appears to be have been caught cold, however. As is repeatedly the case in the GAA, the outrage arrives far too late for anything to be done about it. And I think that’s because we find it rather difficult to get outraged about the abstract.

But this particular outrage now has a name . . . and it’s Donegal. It’s very unfair on Donegal, isn’t it? And it’ll be just as unfair on Armagh or Roscommon, who have to play Dublin on their home/neutral/shared-with-the-Gaels-of-the-world ground in the last round of games. But that’s not for another few weeks, so we can get annoyed about that later.

To be fair, Colm Parkinson of Joe.ie had peered into his crystal ball, was able to predict that Dublin would in fact scrape into the Super 8s, and was asking Paraic Duffy about the unfairness of Dublin playint two games in their home ground last September. But it just all seemed so . . . far away. I’m sure that’ll work itself out, we might have said, going against all known form.

This Donegal statement didn’t happen in a vacuum, of course. They were no doubt emboldened by Kildare’s success in bringing Mayo to Newbridge last Saturday (and then going on and illustrating the benefit both of home advantage and a cause to defend on the pitch).

Also thrown into the mix was the Leinster hurling final replay being fixed for Thurles, and then Waterford’s situation in the Munster hurling championship, when they weren’t allowed to move their “home” games out of the province, was also thrown into the hopper. It seemed as if the GAA couldn’t put a foot right, all of a sudden.

Kildare were right to put their foot down last week because they had won the right to play that game at home. Similarly, in the interest of fairness, every team in the Super 8s gets one home game, one away game, and one game where neither side has home advantage – basically, the neutral round that wasn’t called a neutral round in the original motion, because it stipulated that those games be played in Croke Park.

Dublin fans, and ex-players like Alan Brogan, pointing out that Croke Park is not Dublin’s home ground, are living in make-believe. If you play all your home league games in a ground, that’s your home ground.

Brogan tried to make the qualification that Dublin didn’t train in Croker, therefore it couldn’t be their home ground. But lots of counties don’t train on their nominated home ground – they have centres of excellence for that. To argue otherwise is to insult the intelligence of your audience.

This doesn’t tarnish Dublin’s legacy, as Jim McGuinness suggested. But it further tarnishes the idea of fairness. Nothing will happen this year, because we only recently figured out who was getting screwed here. But if Galway and Kerry can meet in a neutral venue, then so can Dublin and Donegal.