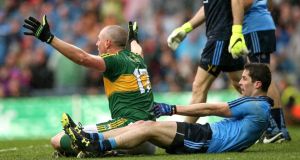 Kieran Donaghy appeals for a penalty after a clear drag down by Rory O’Carroll. Photograph: James Crombie/Inpho

Some All-Ireland finals are the complete football spectacles, and this wasn’t one of them. Conditions didn’t help and the game struggled to come alive, and yet in the end there was no disputing Dublin were worthy winners.

Dublin certainly adapted to the conditions that bit better than Kerry, won most of the physical battles, and were first to so much of the breaking ball. In wet conditions, holding onto possession is also crucial, and Dublin simply mastered that.

Everything makes sense in hindsight, but certainly when Kieran Donaghy came in there was a totally new dynamic to the Kerry attack, and begs the question: should he have started?

There’s no doubt that Donaghy presented one of the biggest problems for Dublin when he did come on. He created some panic in the Dublin defence for the first time in the match, and had that been there from the start it might well have resulted in more scores for Kerry.

Instead, Dublin were able to impose themselves on the game from early on. They had more options too, such as the way Diarmuid Connolly and Ciaran Kilkenny criss-crossed the half forward line. Kilkenny had a magnificent game, his work rate and distribution and ability to hold onto the ball making a big difference for Dublin.

Cian O’Sullivan was also able to hold down the middle of the defence, again until Kerry made the adjustment by bringing in Darran O’Sullivan. He was the only Kerry player who actually ran direct at Dublin and it made a difference too. But again, too little too late.

Overall the Dublin defence was too dogged, and you saw that in the very limited number of goal chances that Kerry got all afternoon. O’Sullivan played his sweeper role exceedingly well, made a brilliant recovery from his hamstring injury and, to me, must be in contention for player of the year.

James McCarthy and Jack McCaffrey were both excellent in the first half, pressing forward on Kerry, causing lots of problems for Stephen O’Brien and Johnny Buckley. It was no surprise they were both substituted.

Brian Fenton also had his best-ever game for Dublin. He’s been an outstanding find for them this year, and his maturity and coolness on the ball for his first All-Ireland final was remarkable.

I felt the rain might actually suit Kerry, given how well they handled it in the semi-final win over Tyrone, but instead it was Dublin who took the task that bit better.

There were a few exceptions. Bernard Brogan spilled a lot of ball, and Shane Enright actually did quite well on him. Brogan will rue some of his chances, but there were still plenty of big performances in the Dublin attack, including Paddy Andrews and Paul Flynn.

Dublin started the better, but then Kerry did briefly get a foothold. The problem is they couldn’t make it count. They hit six poor wides by the end of the first half; had three or four of those gone over they could have made a major difference.

Dublin’s half backs were also in control, but the one thing that cost Kerry badly was Colm Cooper having to defend so much on Philly McMahon, and James O’Donoghue to a large extent, too.

Not having Cooper playing the role he wants, up front, had a major bearing on Kerry’s game, and it was certainly brilliant tactics by Dublin to limit his game in the way they did.

Still, I kept thinking Kerry might still get some kind of stranglehold on the game, but they just couldn’t. I also thought it was a strange decision to replace O’Donoghue. Okay, he was struggling a little, but he’s still your chief goal-scoring threat, and Kerry badly needed that goal. There was that chance late on for Killian Young, brilliantly set up by Donaghy, but Young was the wrong man in the right place. Had O’Donoghue been there, with his handling skills, it might have been different.

By bringing in Paul Galvin I really felt Kerry were grasping at straws. I don’t like to be critical of any management team because they’re the ones at training week in, week out, but I would have thought someone like Tommy Walsh would have presented the sort of threat Kerry for looking for, not Galvin.

There was also a lack of rhythm to Kerry’s game, which must have been extremely frustrating for the Kerry sideline. None of the changes could turn the game in their favour, and it was such a struggle for Kerry to even draw level, which they just couldn’t do. As the game wore on they were climbing a hill and then a mountain.

Kerry did cause pressure on Stephen Cluxton’s kick-outs, especially late on, when he actually gave away a couple of strange balls. But they needed much more of that, and again the goal opportunities just didn’t present themselves. Kerry didn’t get enough time of the ball, all largely due to Dubin’s dogged defending, all over the field.

In fairness to Dublin they showed the greater desire, too. The team that shows that will nearly always win. For Kerry, the problem wasn’t so much desire, but that they couldn’t get any confidence into the game, which they feed off. In fact they never even got a semblance of it. It also shows once again how difficult winning back-to-back All-Irelands can be.

Jim Gavin also deserves great credit for getting this performance out of Dublin. There’s no doubt they’re the best team in the country, constantly raising the bar, and it’s up to everyone else to match it. Another All-Ireland – a third in five years – further cements the attraction of the game in the county, and I think they will continue to dominate for a good few years ahead.

I wouldn’t fear for Kerry, though. The minors had a brilliant win earlier in the day, and there is a very strong conveyor belt of talent coming through. I think it’s important for Fitzmaurice and his backroom to stay on, although they may be a couple of retirements.

That’s all talk for another day, because for now Dublin are All-Ireland champions and that’s all that matters.