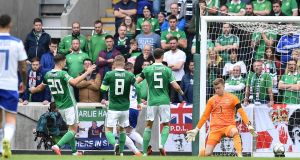 Once Northern Ireland manager Michael O’Neill had shaken off the bitter feeling of defeat he was able to take plenty of encouragement from Saturday’s 2-1 loss to Bosnia & Herzegovina.

Northern Ireland were undone by two sloppy goals which both came against the run of play at Windsor Park – the second a horrible mix-up between Craig Cathcart and goalkeeper Bailey Peacock-Farrell.

Northern Ireland enjoyed 67 per cent possession and registered 26 total attempts on goal, but did not make one count until substitute Will Grigg – making his first appearance since November 2016 – struck in stoppage time.

Cathcart called it one of the most complete performances of his 37-cap Northern Ireland career, and O’Neill agreed there was plenty to be positive about ahead of Tuesday’s friendly against Israel.

“To play with that intensity and dominance, with close to 70 per cent possession in the game, 25 attempts on goal, 18 corners – it tells the story of the game,” O’Neill said.

“Where we have to be better is the final ball and maybe a little bit better with movement in the box and composure as well. Maybe it’s anxiety as well, but those are things we can work on.

“We’ll take a lot out of our performance, and we’ll look to react on Tuesday night when we play Israel here. At the end of the day we’re a team still progressing and still going in the right direction.”

O’Neill will freshen up his side on Tuesday, but confirmed Gareth McAuley will not feature and instead begin training with Rangers after signing for the Glasgow club at the start of the week.

“Israel are a team very much like ourselves,” O’Neill said. “They will harbour ambitions to go to a major championship. They probably think they’ve underachieved in recent times a little bit.

“Like all these games, there is always a significance to it. We will field a strong team, and give game time to players who didn’t get the chance to start on Saturday.”

With Tuesday’s match a friendly, Northern Ireland do not get another chance to put a point on the board in the new UEFA Nations League until October, when they face back-to-back away games against Austria and Bosnia & Herzegovina – a tough assignment after Saturday’s opening setback.

“It will be different,” O’Neill said. “We’ll not have that level of possession and we’ll maybe have to think about where we are pressing games, maybe not as high as we did when we’re the home team.

“But we’re more than capable of holding our own at this level, and I think we are doing that. I still believe we are punching above our weight but that’s credit to the players and the work they have put in.”