Bríd Stack released from hospital with no spinal damage 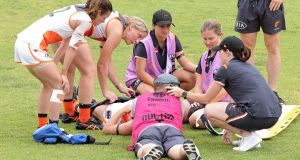 Brid Stack of the Giants is attended to by medical staff during their AFLW pre-season match against the Adelaide Crows. Photograph: Getty Images

A day after she was hospitalised following a heavy collision in her debut for Greater Western Sydney Giants, there was better news about Bríd Stack from Australia this morning with her club announcing that she had suffered no spinal damage and had been released from hospital.

The Cork woman did, though, sustain a stable fracture of the C7 vertebra in her neck and will need to wear a neck brace in the early stages of her recovery, but there was no damage to the nerves surrounding the fracture and she will not require surgery.

The pre-season friendly against Adelaide Crows had been abandoned in the final minute after Stack was injured in a collision with Ebony Marinoff, the Crows player who now faces a disciplinary tribunal after being charged with a ‘forceful front-on high contact with severe impact’ following a review of the incident.

Stack was treated on the field by medical staff for a possible spinal injury before being taken to hospital.

“Bríd and her family have made incredible sacrifices to come to Australia to play in the AFL Women’s competition and we will be supporting them all the way through her recovery,” said Bri Harvey, head of the Giants’ women’s football. “We’d like to thank all those who provided her with the best possible care both at the ground and in hospital across Sunday.”

“She is expected to make a full recovery and will remain in Australia and a key part of the team as she rehabilitates from her injury,” said the club in their statement.

After a glittering Gaelic football career, during which she won 11 All Ireland titles with Cork and seven All Stars, Stack, 34, retired two years ago before joining the Giants last year. She is in Australia with her husband and their young son and had been preparing for her debut season in the Australian Football League, the club’s campaign beginning on February 9th.