Increase in corporate investment seen as key to development and exposure 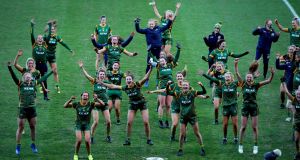 The momentum behind the promotion of women’s sport and the progress made in previous years undoubtedly stalled somewhat in 2020. The impact of Covid 19 meant fixture chaos, uncertainty and eventually watching games on TV or online with no crowds.

It is true that the same issues impacted both men and women. However, 2020 posed certain extra challenges for women’s sport in Ireland and beyond these shores.

Progress despite the challenges

There was a lack of elite women’s sports events to attend or success to savour in 2020. The Irish hockey team was essentially furloughed, the soccer team heartbreakingly fell short of qualification for Euro 2021 and there were no Irish female Olympians and Paralympians to cheer on.

Some positive strides have been made off the pitch, however, and that should be recognised.

The GPA and WGPA voted overwhelmingly in favour of becoming one body. The Irish Ladies Golfing Union and the Golfing Union of Ireland have now come together as Golf Ireland which officially ‘goes live’ this month.

Katie Taylor delivered for us yet again in 2020. The domestic GAA and soccer seasons were completed successfully and athletics battled through. Some minority sports and indoor sport suffered due to no competition at all.

So where are we at with the promotion and development of women’s sport?

The momentum behind promoting women in sport continued, where it could. This included the Irish Times Sport Ireland Sportswoman of the Year Awards taking place virtually to honour the stars that continued to excel despite the incredibly challenging environment.

RTÉ’s Super Saturday, which was centred around the FAI Cup and All-Ireland camogie finals, saw women’s sport celebrated across TV, radio, online and the RTÉ Player. The high profile 20x20 movement wrapped up a successful two-year campaign and Sport for Business continued to be a vocal advocate and several major sponsorship brands continued to promote women in sport.

Despite the fact that the women in sport agenda had to work even harder in 2020 to get cut through, the appetite and momentum to promote it was evident and encouraging.

We specifically explored this area in the Teneo Sports Sentiment Index (TSSI) which is a 1,000 person nationally representative piece of research carried out in December 2020.

When it comes to media coverage and exposure, half of Irish people (50 per cent) believe women’s sport got more prominence in Irish media in 2020 than in previous years. This is down from 73 per cent in 2019, though this may well be a natural consequence of there simply having been less sports content to consume across the board.

This is consistent with the decline in overall viewing numbers as 37 per cent of respondents said they watched women’s sport on TV or online in 2020, down from the 2019 (45 per cent) and 2018 (41 per cent) figures but, again, probably reflective of the Covid impact on opportunities to watch sport across the board.

By contrast 45 per cent of men said that they had tuned in to watch a female sports event while only 29 per cent of women said the same. This may be disappointing on the surface, though it tends to reflect attitudes towards sport in the population at large as they break down along gender lines. What we can infer from this finding, however, is that sports fans tend to watch sport regardless of who is playing if the product is good enough.

The ambition we are all working towards is that sports fans, regardless of their gender, tune in to good sport for entertainment. The TSSI findings underline the fact that more work needs to be done not only to promote women’s sport but to promote interest in sport among women.

Covid-19 restrictions not completely detrimental for sport and physical activity

One of the major trends in 2020 was more females participating in physical activity. The number that said they play or participate in sport and activity rose marginally to 29 per cent versus 2019 where it was 27 per cent, while the number that said they did not participate at all declined marginally. Women’s relationship with sport and physical activity is complex, but it remains true that women still prefer sport and activity to exercise and keep fit (59 per cent) rather than competitive or organised team sports.

As would be expected, the sports with low barriers to participation were the major winners in 2020 with the proportion of females who said they ‘walk for exercise’ increasing from 56 per cent in 2019 to 72 per cent in 2020. Running also saw a significant increase, from 9 per cent to 15 per cent, over the same time period.

Women took up new activities in 2020, with 20 per cent joining a new sports club. Nearly two thirds of females took part in virtual fitness classes, either free online classes or part of a gym membership, which was substantially higher than the comparable figure for men.

It is perhaps not surprising, therefore, that 43 per cent of all women wear a fitness tracker or regularly use a fitness app, compared to 32 per cent for men. Of those who use a fitness tracker, 84 per cent claim that having a tracker motivates them to be more active and healthier. Perhaps the use of technology and data and measurement of success and activity can be a strong persuasive influence for women in the future when it comes to exercise.

Beyond 2020 and commercial investment

Commercial investment has long been recognised as a key driver of women’s sport both outside and in Ireland and our research has shown us that this is resonating now more than ever with the Irish public and indeed with major sponsors.

There is overwhelming support for brands that invest in and sponsor sport. Encouragingly there is clear evidence that the Irish public support greater corporate support for women’s sport.

Sixty-two per cent of all Irish people say that brands that invest in men’s sport should also invest in female sport. Only 11 per cent disagreed with this.

The way forward is relatively straightforward. More investment will lead to more exposure, better terms and conditions and reward for female athletes and more media and promotional coverage.

Alongside climate change and sustainability, diversity and inclusion is now at the top of the agenda for boards and management teams globally. The push for greater equality and recognition is dominating conversations around governance but also sustainable and ethical business practices.

Investment in female sport has always offered major brands a superb opportunity to follow their stated corporate values with meaningful action. It is now imperative for corporates not to just sponsor female teams or competitions because it moves the dial for their brand, but because their customers, investors, employees, shareholders and non-executive directors expect and demand it.

The coming 12 months will be a critical year for women in sport on every front and hopefully we see a Tokyo Games and more progression of our elite stars across all codes.

There is no doubt great strides have been made in the last decade but so much more needs to be done. This is a Government agenda item too. Sport Ireland has prioritised Women in Sport at all levels from administration to coaching to participation to media engagement and this long-term strategy will bring benefits.

It is set to be another challenging year with the long shadow of Covid-19 impacting the first half of it, but the biggest impact on promoting women in sport in the near future will be commercial.

As more sponsorship money pours into women’s sport, more broadcasters will be willing to broadcast and more promotion will follow and more girls will follow too. This will be the big game changer.

Kelli O’Keeffe is the managing director of Teneo

3 ‘Don’t write me off yet’: Conor McGregor to fight on after Poirier knockout