America at Large: Jeannie Morris blazed a trail for women in US sports journalism 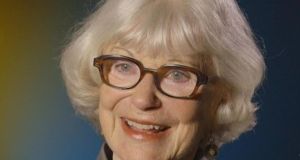 Jeannie Morris: “I think after being the wife of an NFL player for 10 years before I started working, I knew that all these guys were among the most insecure people in the world.” Photograph: YouTube

Jeannie Morris won a bet with her husband Johnny and the prize was the couple had to take time out from their busy careers in sports journalism to bring the family on a year-long trip around Europe.

With four kids ranging in age from eight to 17, they began traversing the continent in August, 1973. Putting 25,000 miles on a Ford Econoline campervan and, veering very far from the traditional tourist trail, drove deep into the old Soviet Union, their every step monitored by the KGB. Seeking an adventure that might stay with them all their lives, Morris mapped out an epic itinerary that traced an unlikely path from Leningrad to Lettergesh, Co Galway.

In Connacht, they sampled a sports day in Renvyle where eight-year-old Holly took second place in one race and Johnny, a former collegiate track star not far removed from his heyday as a wide receiver with the Chicago Bears, won a sprint that yielded a spectacular trophy of Connemara marble and caused some irritation among native competitors angry at the last-minute entry of an interloper.

That same evening, the blue beast, as they nicknamed their trusty steed, ended up marooned in a ditch and might be there yet if a farmer hadn’t happened along at dusk on a tractor to pull them out. Still, they got what they came for, packing away warm memories of days gambolling about on wild ponies and nights sleeping near the foaming lip of the angry Atlantic.

When Jeannie Morris died from cancer last month at the age of 85, most obituaries invariably led with the fact she was the first woman to cover the Super Bowl live for a television network. A definitive entry in the history books, a mere footnote in this extraordinary life story. Her first writing gig was earning $50 for a weekly newspaper column called “Football is a Women’s Game” that the Chicago-American used to initially run in the lifestyle pages under the byline “Mrs. Johnny Morris”. It wasn’t very long before the quality of her work forced them to give her a proper identity of her own.

In an age when distaff reporters were so scarce that many stadiums proudly boasted strict “No women and children allowed in the press box” policies, she was forced to cover one Bears game against the Minnesota Vikings sitting outside with the cameramen. In a blizzard. Whenever she was refused entry to locker-rooms after games because of her gender, she demanded players be brought out to her so she could ask them questions. They duly were.

As with any pioneer, obstacles and troglodytes occasionally blocked her path. When Ted Williams was managing the Texas Rangers at Comiskey Park one day, he questioned her right to be in his dug-out before the game with the other journalists, deriding her as a “shrimp female”. She responded by pointing out the dug-out actually belonged to the Chicago White Sox and her pass entitled her to be there. The greatest hitter in the history of the game, Williams had no comeback to that simple outburst of logic so he just said, “Okay.”

“Intimidated by people I covered?” she said, responding to a question about interviewing star athletes. “I think after being the wife of an NFL player for 10 years before I started working, I knew that all these guys were among the most insecure people in the world.”

After the Chicago Bears’ quarterback Jim McMahon responded to a request for a television interview by flipping her off with the middle finger, she ran the embarrassing footage of him with the offending digit raised on the news that night. He didn’t talk to her again for a year but the message was clear. Morris didn’t suffer fools. Deploying a technique one of her colleagues described as “charm and disarm”, she garnered 11 Emmys, and became the first woman to receive the Ring Lardner Award for Excellence in Sports Journalism.

“Athletes generally are closer to their mothers,” she explained. “They’ll tell me things they’d never dream of telling a man.”

Morris was much more than just a gridiron reporter. When Brian Piccolo, one of her husband’s team-mates with the Bears, was diagnosed with cancer, she wrote a poignant best-seller about his struggle with the illness and subsequent death.

Her own family’s European odyssey was chronicled in another book, “Adventures in the Blue Beast”, where she described Connemara as the cleanest place she’d ever been, and she also produced a compelling account of Caroline Mosley Braun’s 1992 campaign to become the first African-American woman in the United States Senate.

There were acclaimed documentaries too. A deeply personal exploration of the politics of abortion in which she shared her own harrowing experience as a mother of four travelling to Tijuana, Mexico and paying $400 for a backstreet procedure.

A series about ground-breaking female adventurers made with her daughter Holly, and a one-off about the search for the mythical Shangri-La. This past year, viewers around the world witnessed her unique ability to get behind the curtain as chunks of “The Last Dance”, the celebrated Michael Jordan series, contained footage she’d shot while making two series about him for Chicago’s Channel 2 in the 1980s.

Knew the game. Knew her stuff.