Barry Cahill expects Donegal to be well-primed for Dubs test 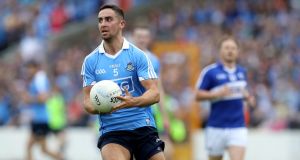 The former Dublin footballer bases his assertion on a respect for a former team-mate at the St Brigid’s club, Donegal manager Rory Gallagher with whom he played. Even then he knew that that the latter would make an excellent manager.

“I know Rory quite well and when he sat down to plan for the year I’m sure he felt they would have to play Dublin at some point to get to an All-Ireland final or win an All-Ireland so I think he will try something unusual.

“As soon as he came into our club [St Brigid’s] in 2002, he nearly became player-manager at one stage, he was that vocal. In training, in the drills that we did, in the tactics, video sessions, you could see straight away that he had the mindset of a coach from his mid-20s onwards. It was no surprise that he took to management like he did.”

Cahill believes the absence of key Dublin players Rory O’Carroll and Jack McCaffrey and potentially, if injury rules out James McCarthy, has brought the chasing pack closer to the champions.

“James McCarthy earlier in the year was one of the front-runners for Footballer of the Year. He has turned into such a key player for them. Going forward, the fitness and the stride on him to get past players in the middle third is phenomenal.

“There are very few players who have that ability. Also, he’s so composed when he gets into the opposition half. He know when to go for the score himself, or when to lay it off to Bernard [Brogan] or Ciarán [Kilkenny] or Dean [Rock] to kick a score.

“So he’s very intelligent to get into that space. So if he doesn’t play this weekend – and I’d be very surprised if he does – that will narrow the gap between the teams.”

So what would he advocate if McCarthy was ruled out.

“I would bring in Mick Fitzsimons to the full-back line and maybe push Philly McMahon or even Jonny Cooper forward. I wouldn’t bring Ciarán Kilkenny back, although I’d love to see Paddy Andrews back in the team.

“Dublin are a better team with him in it and he’s pushing very hard for a starting place. So they have options there. But I can’t see them putting a half forward into the half back line.”

Cahill suspects Donegal will have a plan to try and negate the influence of Dublin’s sweeper Cian O’Sullivan.

“Any team trying to get a bit of joy against Dublin, they have to target him and put him under pressure. Cian is a phenomenal footballer but at times he looks in cruise control, nobody really targeting him or putting him under pressure.

“He can see the game, read a game. He looks so comfortable doing that that maybe they’ll try and put somebody directly on Cian, occupy him.”

Dublin manager Jim Gavin has a conundrum or two to solve, one being how to curtail the influence of Donegal’s Ryan McHugh. Cahill advocated: “There is an argument to be made for putting a defender on him, try and man-mark him. He’s such a key player. He got two goals in the 2014 semi-final, could have got a third.

“This year his long-range point scoring has been phenomenal. He has been Donegal’s best player and a contender for Footballer of the Year.

“When you’re playing against a team that has a really good footballing midfielder, you should put a defender on him and try and nullify the opposition’s best player. I don’t think Dublin would lose a huge amount attacking wise by going that route.”