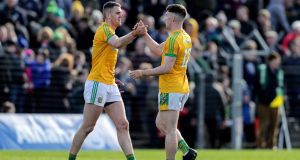 It was former GAA director general Liam Mulvhill who mused at an annual launch for the National Football League how he found it mystifying a competition could start in a lather of expectation with a full Croke Park, as happened for Dublin-Tyrone in 2007 and 2009, and yet fizzle out amidst relative indifference by the time the final arrived.

The simple answer is by the time this weekend rolls along every year, most people have seen enough to know how their county stands ahead of the onrushing championship. Aside from the Division One titles, all matters of the moment have been decided.

It will be great for Leitrim to arrive for a final in Croke Park for the first time since 2006, but the Division Four final against Derry will be more a lap of honour to celebrate their promotion and so it goes for the other two lower divisional titles.

Even in the elite final, Kerry and Mayo know that the future’s dusty file on 2019 will contain far more relevant details about the nature of their year than indicated by the Sunday’s outcome.

The snapshot of where the league has left everyone reaches peak relevance this weekend.

Division One
Dublin’s failure to reach the final for the first time in seven years was the most newsworthy occurrence. True, Jim Gavin’s side forged their own links between spring and summer success and the team may learn more from what happened in losing tight finishes against two of their highest-profile opponents, Kerry and Tyrone, but in other years the league was Dublin’s highway to the championship. This has more the appearance of a crossroads.

Division Two
Three decades ago the biggest rivalry in the game was Cork and Meath. This season they went their separate ways in Division Two. For Meath, a first return to the top flight in 13 years capped a fine season built on a radically improved defence – conceding a whopping 0-4 fewer per match. Cork’s relegation in a frantic finale was their first ever demotion to the third tier.

Division Three
In recent years there has been plenty of examples of teams getting relegated in a broken lift, which hasn’t stopped at the next floor. Louth looked odds-on to be this year’s – literal – fall guys after a 2018 spent in Division Two compiling the worst points difference (-67) seen in the entire league since 2014. Instead new manager Wayne Kierans has overseen a resurgent season which, with the only unfinished fixture in the four divisions, may end in promotion.

Division Four
Leitrim’s last active promotion as opposed to sundry re-grading through the years came 29 years ago. The county was relegated to Division Four in 2008 and had spent the intervening years gathering dust in the basement. This was a great season for Terry Hyland’s team, duking it out with Derry and coming second, a massive six points clear of the field.

Division One
After all the years of being chided for not making the league final, Mayo did just that, ending a roller-coaster campaign in Croke Park, having broken through a couple of useful newcomers – Fionn McDonagh, Matthew Ruane and Michael Plunkett. New Kerry manager Peter Keane has tightened the defence considerably and seen Seán O’Shea’s ascent continue. Tyrone unveiled a new game plan and transformed their campaign and maybe season, whereas Monaghan started the Dublin slide and stayed out of the relegation weeds despite near entanglement.

Division Two
Despite resting a few regulars, Donegal did the necessary by bouncing back and play resurgent Meath in Saturday’s Division Two final. Fermanagh took it to the last day of the season but the limitations of the ultra-defensive set-up left them short in the end. Still, they stay in the division, as do Clare, for what will be a fourth year on the trot.

Division Three
In an insanely tight finish, four counties had a shot at promotion, which will be decided by Saturday’s postponed Louth-Westmeath face-off. Laois fluctuated during the season but came good in the end to go up whereas in his first year, Pádraic Davis navigated Mullinalaghta’s All-Ireland adventures to keep Longford, as they say, relevant.

Division Four
This was a more competitive Division Four than the runaway success of Derry, getting straight back out of it – the recommended way to treat a residency here – and Leitrim might suggest. Waterford did well to challenge for best of the rest, as did Wicklow, bottom of the whole pile a year ago, to finish mid-table.

Division One
It was Dublin’s lowest finish in five years but Galway will be frustrated to have gone into the last day in position for a final place only for a second-half disintegration in Omagh to dislodge them from the top half of the table. Cavan’s and Roscommon’s relegation was anticipated but it was the first time since the format came in 11 years ago that both of the previous season’s promoted teams had gone straight back down.

Division Two
Cork’s ailing fortunes at least mean that year two of the county’s five-year football plan will have plenty of upside, but they also overshadowed Tipperary’s parallel descent after a couple of years threatening a major breakthrough. Armagh survived but trod water with just two wins whereas All-Ireland quarter-finalists Kildare ended up well adrift of promotion.

Division Three
After a lengthy tenancy in the division, Sligo’s lease expired after eight years. So did Carlow’s briefer sojourn in more agonising circumstances in the dying seconds of the campaign. Offaly were the ones to stay up but only just, whereas Down watched the precise numbers click into place that would undo their promotion challenge on the last day.

Division Four
At the start of the season, Wexford and Antrim were among the favourites for promotion but neither achieved lift-off, as the runaway leaders disappeared out of sight. At the bottom with the weight of the entire league on their shoulders were Limerick and London.

Division One
The record shows that Roscommon went straight back from where they had come, but back on February 10th they led Tyrone more or less from pillar to post before conceding a late equaliser to Niall Morgan’s long-range free. Had they won, the additional point would have kept them up.

Division Two
Cork’s relegation in the end needed everything to go wrong. It did. Despite a feisty win in Armagh, Ronan McCarthy’s side also needed Tipperary to beat Clare in Thurles, which they were doing by three points going into the 70th minute. Then an unanswered 1-2 re-wrote the script.

Division Three
Unbeaten in the first two fixtures on their return to the division after 34 years, Carlow needed either something from the local derby against Laois or for Offaly not to win in Sligo. With the match level in Collooney, three minutes into injury-time Mark Abbott scored the winner for Offaly, relegating Carlow.

Division Four
Antrim finished third but well out of the promotion picture, having lost four matches along the way. Three of those were however by just a point, including the two against promoted Derry and Leitrim.