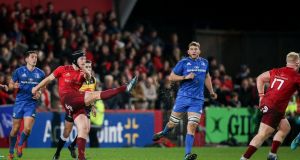 Munster and Leinster are on course for another intriguing festive Guinness PRO14 clash at Thomond Park, Limerick. Photograph: Gary Carr/Inpho

Leinster may be the reigning Pro14 champions, and they may be considered one of the strongest club sides on the planet, but just as the last of the turkey sandwiches are being polished off they’ll be heading into the Thomond Park cauldron. Twelve months ago they travelled home from Limerick as a losing side, a rare occurrence last season. No doubt they’ll be sniffing revenge.

It’s the ideal start to the season – fireworks under lights in Thurles. It’s the 2019 champions versus the kingpins of 2018 and reigning Munster champions. It’s the aristocrats against the artists. The flawless versus flamboyant. Over the last few seasons this is a tie that has slowly been building into a ferocious rivalry and it has thus rarely disappointed. All the indicators suggest this will be no different.

The Dublin ladies’ football side may have completed an impressive three-in-a-row in September, but it would be unfair to say they’re all-conquering. After all, they’re not the league champions. That honour belongs to the Rebelettes who defeated the All-Ireland champions twice last spring. They eventually fell to Mick Bohan’s side in the championship but there’s just enough healthy animosity festering to make this a fascinating renewal of the duel.

Just over a month has passed since the end of the season and League of Ireland fans are already eager to get back on the road. Unfortunately they still have a few weeks of anticipation to go, though the upcoming President’s Cup has the look of a fixture that will make all the waiting worthwhile. If the FAI Cup final is anything to go by, expect quite the atmosphere.

Nothing is guaranteed in sport; even less is guaranteed in racing. However, if the stable companions at Willie Mullins’ yard make it back to the Cheltenham Gold Cup it promises to be a battle to remember. Al Boum Photo won last year’s renewal. Kemboy then beat his rival in Punchestown. There may be other dangers too, but this battle is by far the most fascinating.

1 Gordon D’Arcy: There’s more to Saracens’ success than money
2 10-man Arsenal show their heart to rescue a point at Chelsea
3 As the UK tightens gambling laws Ireland still lags way behind
4 Seán Moran: Total disregard for schools as GAA votes one way and acts in another
5 Solskjær can’t guarantee Rashford will play again this season
Real news has value SUBSCRIBE
Here is your handy guide to sport on television this week