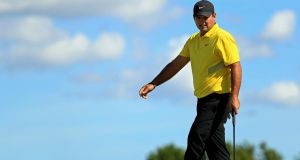 Patrick Reed lines up a putt on the third hole during the third round of the Hero World Challenge in Nassau, Bahamas. Photograph: Mike Ehrmann/Getty Images

Patrick Reed was penalised two strokes for a rules violation in the Hero World Challenge third round in the Bahamas on Friday in an incident that left two former players incredulous at the former Masters champion’s actions.

Reed was docked the strokes after twice moving sand while taking practice swings in a sandy waste area at the 11th hole at Albany Golf Club, which served to marginally improve his lie.

The 2018 Masters champion was deemed to have improved his lie and intended line of play by “removing or pressing down sand or loose soil,” in violation of rule 8.1a.

The halfway leader thus carded a round of 74 and fell three strokes behind the 54-hole leader, fellow American Gary Woodland.

Reed said he had not intended to gain any advantage, but officials said intent was irrelevant.

“After seeing the club go back and brush some sand, they [PGA Tour officials] thought that’s a breach of the rules,” Reed told reporters. “After seeing the video, it’s a two-stroke penalty. I accept that.”

The television pictures were filmed from behind, which Reed said did not quite show where the club and sand were in relation to the ball.

Reed said he had grounded his club well behind the ball and that the sand he moved would not have made any difference to the shot.

“You only have one camera angle, that’s all you can go off of,” he said.

“It’s my word against their word. They weren’t standing there.

A closer look at Patrick Reed’s two-stroke penalty during Round 3 of the Hero World Challenge. pic.twitter.com/z2aqkajnYq

“I don’t ever put the club directly behind the ball because I’m always scared of the ball moving.”

Rules official Slugger White said whether Reed intended to brush the sand or not was not at issue.

“You could see the path of the sand come away on two different occasions,” White told reporters.

“He did it the first time, put the club down again and did it another time. Intent would not matter here.

“You cannot remove or press down loose soil or sand. That’s the bottom line.”

“You just can’t do that. What are you thinking?” said four-times tour winner Kratzert.

Meanwhile Marc Leishman thinks Reed’s rules violation has given the Melbourne crowd plenty of ammunition to try and get under the American’s skin at next week’s Presidents Cup.

Australian Leishman, a member of the International team taking on a United States side featuring Reed and captained by Woods next week, said he had not been impressed by the incident.

“Yeah, I did see it and it looked pretty ordinary, to be honest,” he told reporters at the Australian Open on Saturday.

“That’s probably all I’ve got to say about that. It didn’t look too good for him.”

Leishman stopped short of suggesting fans at Royal Melbourne bring shovels to taunt the American when the biennial team competition gets underway on Thursday, but did think the incident could expose Reed to some derision from the galleries.

“There are opportunities there, put it that way. Maybe not shovels, but I think he’s definitely opened a door there, that he’s brought on himself,” he said.

“As long as it’s not disrespectful, I think. You never want to cross the line, but I think there is some pretty good ammo there, isn’t there?”

The Australian crowds were accused by some International players of being awestruck by Woods and the American team when the Presidents Cup was last played at Royal Melbourne in 2011.

South African Ernie Els, who will captain the team made up of players from countries outside the US and Europe next week, has called on the galleries this year to be far more vocal in their support of the home side.

The United States team has won all but two of the 12 Presidents Cup contests with the sole International triumph coming at Royal Melbourne in 1998.

1 Gary Neville in Qatar an exercise in semi-journalism
2 Owen Doyle: Creeping professionalism of schools rugby a threat to the game
3 Jürgen Klopp insists Liverpool title party is not on his mind
4 Investment in our Olympic hopefuls may be costly – but it’s worth it
5 Meet the Iraqi-American behind Conor McGregor’s success
Real news has value SUBSCRIBE