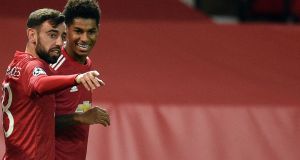 Manchester United moved a step closer to the knockout stages of the Champions League last night, as they beat Istanbul Basaksehir 4-1 at Old Trafford. Ole Gunnar Solskjaer gave starts to Edison Cavani and Donny van de Beek in an attacking line-up but as ever it was Bruno Fernandes who proved the catalyst, the Portuguese opening the scoring after seven minutes with a fine half-volley. Another Fernandes goal and a Marcus Rashford penalty put the game to bed before half-time, with Daniel James making it four at the death. United sit top of Group H and need one point to progress. Chelsea meanwhile are through to the last-16 thanks to a 2-1 win over Rennes in yesterday’s earlier kick-off, Olivier Giroud scoring an injury-time winner in a week where speculation over his Stamford Bridge future has been rife. There were also wins for Juventus, Borussia Dortmund and Barcelona. Tonight, Manchester City travel to play Olympiakos (5.55pm) while Liverpool welcome Atalanta to Anfield (8pm).

“They could still be out there and the score would still be 18-7.” That is Gordon D’Arcy’s assessment of Ireland’s attacking performance in last weekend’s defeat to England at Twickenham. And in this morning’s column, he has stressed Ireland need to get the basics right after they were tactically exposed by Eddie Jones’s side and their ferocious defence. He writes: “The coaching in camp will come under severe criticism until they fix the basics. I know what Joe would do. I know what Cheika would do.” Meanwhile Andy Farrell will definitely be without both Johnny Sexton and Robbie Henshaw for this weekend’s final Nations Cup group game against Georgia at the Aviva Stadium (Sunday November 29th, kick-off 2pm). Eric O’Sullivan has been drafted into the squad as cover for the injured Ed Byrne but there will be no further additions to the 34-strong party.

6 Blindboy Boatclub: ‘I had the choice of being a psychotherapist or be a mad bastard’

9 Colum Eastwood: Seamus Mallon’s offer is still on the table if unionism is interested

10 Suzi Quatro: ‘If he’d done that backstage he’d have been singing soprano for the rest of his life’

17 Sturgeon ups the ante with promise on independence vote

18 Talks resume between unions and officials over reopening special schools

22 Traveller who tried to book hotel wedding awarded €15,000 for discrimination

23 Coronavirus: Vaccination of over-70s to start next month, says Donnelly

27 Covid-19: Passengers may be required to pay for stay in quarantine

30 Could a Covid-19 smell test help bring coronavirus under control?

34 David Baddiel comes to Ennis to meet a Holocaust denier

38 Covid-19: How to look after yourself if you catch the virus

39 My Covid experience: ‘The mind starts to race. Oh God, why didn’t I do more with my life?’