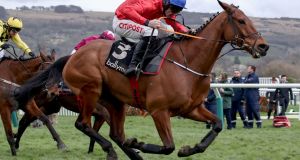 Envoi Allen is a hot favourite to stretch his unbeaten record to a perfect 10 at Fairyhouse on Sunday. Gordon Elliott’s hugely exciting novice is set to be the star attraction of this weekend’s winter festival action when lining up for just his second start over fences.

Jockey Jack Kennedy gave Envoi Allen “10 out of 10” for his debut over the bigger obstacles at Down Royal a month ago and the horse will step up to Grade 1 company for Sunday’s Bar One Drinmore Novice Chase.

The €70,000 contest is one of three Grade 1 prizes on the programme, topped by the €100,000 Hatton’s Grace Hurdle where another hugely popular unbeaten star, Honeysuckle, will try to preserve her own unbeaten record.

Sunday’s most valuable contest isn’t one of the top-flight races but rather the €125,000 Porterstown Handicap Chase which has boosted prizemoney due to the cancellation of this year’s Irish Grand National.

A year ago Envoi Allen landed the winter festival’s third Grade 1 prize, the Royal Bond Novice Hurdle, while he also won a bumper at the meeting in 2018

However, Envoi Allen, the horse with four bumpers under his belt and four victories over hurdles last season, will be the focus of a lot of attention.

Initial bookmaker reaction has been to make him 1-3 for the weekend. He is already a 2-1 favourite to secure a third Cheltenham festival victory in a row in the Marsh Novice Chase next March.

Envoi Allen is one of four Elliot entries for Sunday’s contest with the three others from Joseph O’Brien’s yard in a head-to-head clash between the top trainers.

Elliott, who secured the first Grade 1 of his career in the Drinmore a decade ago with Jessie’s Dream, has also left in the JP McManus-owned Andy Dufresne as well as Easywork, who chased Envoi Allen home in last season’s Ballymore at Cheltenham.

O’Brien landed the Drinmore last year with Fakir D’Oudairies, although his trio of Assemble, Embittered and Home By The Lee look to face a major task.

A year ago Envoi Allen landed the winter festival’s third Grade 1 prize, the Royal Bond Novice Hurdle, while he also won a bumper at the meeting in 2018.

However, he has to concede to Honeysuckle in the course-specialist stakes as Henry De Bromhead’s mare has won five of her eight career victories at Fairyhouse.

It’s a record that includes a sparkling victory in last year’s Hatton’s Grace and she dominates a nine-strong entry this time after Tuesday’s declaration stage.

Unlike 2019 it will be Honeysuckle’s first start of the campaign and she could face a new threat in the Willie Mullins trained Saldier.

He has been off the track since winning the Morgiana over a year and has never tackled Sunday’s 2½ mile trip before. However, he is officially rated equal to Honeysuckle on 159, although she will get a mare’s allowance.

“We will start in the Hatton’s Grace and hopefully she will show the same form as she has done in the last couple of seasons. She seems to be working really well. We will then aim for the Irish Champion Hurdle (February) and see after that,” De Bromhead reported.

Elliott has left Cracking Smart and Fury Road in the Hatton’s Grace and his big hope for the Royal Bond looks to be Ballyadam, owned, like Envoi Allen, by Cheveley Park Stud.

Elliott is the only trainer to complete the Grade 1 winter festival hat-trick having pulled it off with the Gigginstown trio of Mengli Khan, Death Duty and Apple’s Jade in 2017.

The ground at Fairyhouse is currently “soft” with a mainly dry forecast leading up to a meeting that has had to be postponed in the past due to poor weather conditions.