Celtic defeated but not out; Ulster aim to make home advantage count 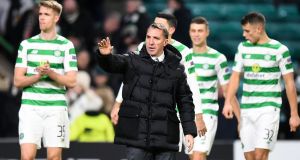 Despite losing 2-1 to Red Bull Salzburg and failing to collect the one point they needed to secure their Europa League progression, Celtic have still qualified for the last-32. Rosenborg’s unlikely draw with RB Leipzig means Brendan Rodgers team take second spot in the group, despite a poor showing on the night and a horror mistake by goalkeeper Craig Gordon. Chelsea have condemned supporters who were heard singing an anti-Semitic chant during their 2-2 draw with Vidi FC in Hungary, just days after four fans were suspended for abusing Raheem Sterling. Both Chelsea and Arsenal - who were 1-0 winners against Qarabag last night - took top spot in their respective groups.

Ulster have given themselves a serious chance of reaching the knockout stages of the Heineken Champions Cup for the first time in five seasons, but they need to follow up on last weekend’s heroics in Llanelli with another win over the Scarlets in Belfast tonight. They’ve named an unchanged team. In Challenge Cup action tonight, Connacht travel to take on Perpignan where Paddy Jackson starts at outhalf for the French club. On the international front, New Zealand head coach Steve Hansen has confirmed he will step down at the conclusion of next year’s Rugby World Cup in Japan after 16 years with the side.

5 When a ‘good father’ decides to kill his whole family

19 Jennifer O’Connell: The Government doesn’t trust us and it’s mutual

27 ‘We should have done better’: Cillian de Gascun, Paul Reid and Stephen Donnelly look back

28 Steve McQueen: ‘Calling me a political director is like calling me a male director’

29 Thoroughly modern makeover on tucked away Ranelagh road for €950k

30 Divers steal beer being aged by sunken ship off Argentina

33 Kate Winslet: ‘I shouldn’t have worked with Woody. I’ll always grapple with that regret’