Whole New Ball Game: He believes in science when it helps him win, but forget vaccines 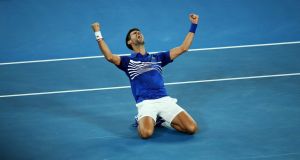 The curse, at least, has been consistent. Almost every sportsperson I’ve ever been drawn to has, role model wise, been a stinker. The Hurricane. Best. The Rocket. McEnroe. Keane. John Daly teeing off beer cans. Beefy and even now Nick Kyrgios F-bombing Centre Court.

It’s been a challenge finding a true paragon to back.

A cheerily shameless Michael Jordan in the compelling The Last Dance is a different kind of fall from grace, money and success his only God. Now Novak Djokovic has tumbled right off the tennis role model rack.

Djokovic has renounced science and is a signed up anti-vaxxer. For a guy who understands the physics of a tennis racquet and ball, it’s bounce on a court, the action of the court surface, the viscosity of the air and the effect that has on the ball travelling through space, denying vaccines is almost like disavowing all the science in tennis that made him.

Djokovic credits his success on the court to his nutritionist, who used the fruits of medical research to steer him away from the foods that caused him to be ill

For the multiple major winning player rejection of modern medicine has aligned him awkwardly alongside the Family Research Council and other conservative Christian groups who understand the 715 metres per second muzzle velocity of their AK47 will kill a bad guy from 300 yards but refuse to support the efficacy of vaccination.

Djoker - the nickname has real appeal now - believes in babies taking it on the chin when Rubella hits town and hands out free measles vouchers. Smallpox. Throw them into that swimming pool without water wings.

He believes in science when it helps him win at Wimbledon, Roland Garros or Flushing Meadow or survive the heat in Melbourne. He uses science to make him a better player. He knows a racquet’s power potential, just like a vaccine, is determined in the laboratory.

There they measure ball velocities and calculate the ratio of the outgoing bounce speed to its impact speed. All for him. Get this mouthful. Impact speed = ball speed + racquet speed. He understands the physics. He’s no fool.

He credits his success on the court to his nutritionist, Igor Cetojevic, who used the fruits of medical research to steer him away from the foods that caused him to be ill. To conquer the world he stuck to vegetables, beans, white meat, fish, fruit, nuts, seeds and healthy oils.

Djokovic has firsthand knowledge about ‘stuff’ going into his body, its impact, its value. But hell, you could put fire to his feet, hold him down and stuff him with bagels. All very uncomfortable. But not enough it appears to take a coronavirus vaccine.

In 2017 he met with the former Spanish professional Pepe Imaz, who runs a tennis school in Spain. Imaz took into account the philosophy of love and harmony in his tennis lessons. The training followed a spiritual methodology with his techniques also including ‘meditation’ and the ‘power of lengthy hugs.’ So Djokovic had a bit of that. But hugging up to a shot, no way.

The world number one has been grinding his teeth recently having come under fire from one of the Serbian government’s top scientists after saying he wouldn’t want to be inoculated against the novel coronavirus because he is “opposed to vaccination” when vaccination might just save sport as we know it.

During a recent Facebook live chat with other Serbian athletes he also said that he “wouldn’t want to be forced by someone to take a vaccine in order to travel.” It was in response to calls for tennis players to be vaccinated whenever the tennis season resumes - if there is a vaccine available by then.

Dr Predrag Kon - let’s just call him King Kon - an epidemiologist and part of the Serbian government’s effort to combat the virus, criticised Djokovic for creating “misconceptions” with his remarks.

“As one of Djokovic’s most loyal supporters, I wish I had had the opportunity to explain the importance and immense contribution of immunisations to the health of the population,” said Kon adding “it’s too late now - he’s created misconceptions.”

Djokovic - feeling some heat for being cast as, eh, not intellectual on the matter - responded to the New York Times. “I am no expert, but I do want to have an option to choose what’s best for my body,” he said. “I am keeping an open mind and I’ll continue to research on this topic because it is important and it will affect all of us. To be honest, just like the rest of the world I am a bit confused.”

More misconceptions. His research means Google it unless he is embarking on a personal phase one clinical study followed by Phase two, three and four trials. And the rest of the world is far from confused.

The interesting part now is what the Wimbledon champion will do when the ATP professional tour is back up and running. Summed up by former player Amelie Mauresmo as ‘people coming from all parts of the world by airplane to play in a tournament’, that kind of sumptuous Petra dish could present the anti-vaxxer with a dilemma.

He is three Grand Slams off equalling Roger Federer’s men’s record of 20 titles and more than five years younger than the Swiss. But time may be running out. He will be 33-years-old this month.

It proves another point. For a role model you can never be too old to set a bad or dangerous example.