10 years on: The night Tiger Woods hit a fire hydrant and his world turned upside down 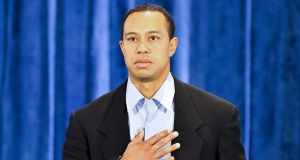 Tiger Woods making his first public statement in February 2010 after crashing his car the previous November. At the event at TPC Sawgrass Woods publicly admitted to cheating on his wife Elin Nordegren but maintained that the issues remain “a matter between a husband and a wife”. Photograph: Lori Moffett-Pool/Getty Images

Yesterday marked 10 years since the scandal that rocked professional golf and one of the first true internet explosions of the modern age. On November 27th, 2009, Tiger Woods was injured in a car crash near his Florida home.

The world number one golfer had mysteriously struck a fire hydrant and a tree with his SUV. It emerged soon afterwards that Woods’s wife, Elin Nordegren, had tried to get into the locked car and used a 9-iron to smash a window.

What followed was a media furore rarely seen in the United States and elsewhere as the world’s richest sportsman and corporate darling came unstuck with a series of damaging allegations. The National Enquirer, a US tabloid, ran a story alleging that Woods was having an affair with a woman named Rachel Uchitel. By the end of the month, more than a dozen women had claimed to have had affairs with Woods. Accenture, AT&T and Gatorade were among the companies to drop the golfer, although Nike remained by his side.

The scandal reached such a point that the story surpassed 9/11 for most consecutive front-page stories in the New York Post, 20 straight days until December 18th. Meanwhile on social media, the world was only learning of the power of likes and shares, and Facebook and Twitter had one of their first truly “viral” stories. It was salacious, lurid in detail and everybody wanted a bit of it, from late night talk-show hosts to Saturday Night Live.

Even Woods found himself caught up in his own scandal. The best advice may have been to avoid all coverage of it if possible, but his then coach, Hank Haney, said Tiger spent time searching for his name and stories about himself on gossip sites.

“A couple of times, he suddenly said ‘Uh-oh, here’s another story,’ before immersing himself in it,” Haney said in The Big Miss. “He was reading comments from the readers, many of them cheap shots.” When Woods’s character was lampooned in a South Park episode, Woods laughed and was proud he made the show, according to Haney.

For Woods, this scandal had been coming. In spring 2007, the golfer had been caught having sex with a cocktail waitress in Florida. The National Enquirer didn’t release this news, instead using it as leverage to get Woods to appear as the cover star of American Media’s Inc’s other main publication, Men’s Fitness magazine. That only bought him a few years of respite, and he couldn’t outrun the gossip forever with tabloid favours.

After a trip to rehab for sex addiction, Woods returned for a eerily staged press conference which Lara Marlowe in The Irish Times described an “act of contrition that had all the ingredients of American drama”. Standing before a hand-picked audience of relatives and friends in Florida, Woods said: “I thought I could get away with whatever I wanted to, I felt that I had worked hard my entire life and deserved to enjoy all the temptations around me. I felt I was entitled. Thanks to money and fame, I didn’t have to go far to find them. I was wrong. I was foolish”.

Not that the public shaming would finish for a sport with a conservative base like golf. When Woods finally returned at the Masters in April 2010, the Augusta National chairman Billy Payne laid into his conduct: “It is simply not the degree of his conduct that is so egregious here,” Payne said. “It is the fact that he disappointed all of us, and more importantly, our kids and our grandkids. Our hero did not live up to the expectations of the role model we saw for our children.”

To show the level of Woods’s golf and mental resolve, he opened with a four-under-par 68 in probably the most watched opening round in Masters history and contended for another Green Jacket, eventually finishing in a tie for fourth. But Woods failed to win for two years and while he was also dealing with injuries, he struggled to apply himself to the game. An exchange with a journalist before the 2010 JP McManus Pro-Am tournament in Limerick gave an indication into his mood at the time, where terse answers were accompanied by a death stare.

Reporter: “What will your build-up be to St Andrews [the upcoming Major venue]?”

Woods: “Need to get home”

In the aftermath of the scandal, Woods’s agent Mark Steinberg repeatedly told him that all he had to do was perform well and people would forgive and forget, as they had done with Kobe Bryant . It wasn’t as easy as that, however, and Haney said that after the incident it felt the curtain had been pulled back like in the Wizard of Oz. The scandal had an impact on his golf game, with the general feeling that the unbeatable aura was gone. The putts he always got just weren’t falling like they used to.

Woods would rededicate himself to practice and in 2012 he won three times, while in 2013, he won five times on the PGA Tour and reached number one in the world again briefly. With every passing year from the scandal, the world forgot a little bit more, so maybe Steinberg was right that winning takes care of everything.

But still in the back of the mind was that Woods still hadn’t won a Major since the scandal. That changed in April of this year, when the American won the Masters in spectacular fashion, only a few years after debilitating back injuries meant he had barely played a tournament for two years.

Woods had come full circle with not just his golf game, but his public perception. Today, he is one of the most popular athletes in the US and still drives television ratings for golf. In the heat of the scandal, Woods couldn’t have imagined the outpouring of support for his Masters win. America loves a redemption story, and in Tiger they have their real-life Hollywood template.