A big night for Liverpool and United; Derry starlet on facing up to racism 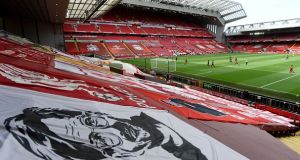 Aston Villa moved out of the Premier League relegation zone last night after a shock win over Arsenal - who in their previous two matches had beaten Liverpool and Manchester City. Watford’s heavy defeat to City earlier in the evening gave Villa an opening they took with relish, performing with admirable rigour and scoring an excellent first-half decider through Mahmoud Trezeguet. They are now outside the relegation zone for the first time since late February. For Arsenal, Europa League qualification through the league is now impossible and they must win the FA Cup final to qualify for Europe next season. Tonight Liverpool will lift the Premier League trophy following their match with Chelsea at Anfield, with a special ceremony taking place on the Kop to encourage fans to watch at home rather than gather in crowds outside Anfield. Manager Jurgen Klopp believes the scale of the European and World champions’ achievement in winning the title with seven matches to spare, and after a three-month interruption due to Covid-19, will not sink in until the trophy is in Jordan Henderson’s hands. Also tonight, Manchester United continue their top four battle when they host West Ham, and Ole Gunnar Solskjær has refused to confirm whether David de Gea will retain his place after his latest error in the FA Cup semi-final. United kick off at 6pm before the action at Anfield gets underway at 8.15pm.

Bernard Laporte, the president of the FFR, has confirmed that the postponed 2020 Six Nations match between France and Ireland has been rescheduled for October 31st in the Stade de France. World Rugby will decide on a revised international window for the end of the year on July 30th. Our ‘Houses of Sport’ series continues this morning with fortress Thomond Park, where the 16th man always gets his game. Gerry Thornley writes: “Aside from the silence studiously afforded kickers, on the rare occasions when Munster and Thomond Park was becalmed, all it would take was one piece of brilliance by a player in red, or a mistake by an opponent or, if all else failed, a good old scrap to turn up the volume and the temperature again.”