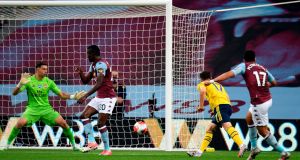 Five days is a long time in football. Last Thursday, Aston Villa were left desolate when Theo Walcott’s equaliser at Goodison Park appeared to have inflicted a fatal wound in their effort to escape relegation. But now they have control of their destiny after a deserved, battling win in which Arsenal rarely came close to puncturing a marvellously drilled back line.

Watford’s heavy defeat to Manchester City earlier in the evening gave Villa an opening they took with relish, performing with admirable rigour and scoring an excellent first-half decider through Mahmoud Trezeguet. As a result, they are now outside the relegation zone for the first time since late February.

For Arsenal, previously buoyant, the season’s success now hangs purely on their FA Cup final against Chelsea. Europa League qualification through the league is now impossible and Mikel Arteta may come to regret a flat, imprecise display.

Anyone wondering whether Villa would be tightened or loosened by their opportunity felt their thoughts disrupted, in the opening minutes, by the persistent hum of a light aircraft dispatched with the visitors in mind. “Back Arteta, Kroenke out,” read the banner trailing behind the plane, which circled the stadium several times and had presumably been commissioned by supporters familiar with the manager’s recent entreaties for pre-season investment. One particular group of fans was quick to claim credit on social media.

Arteta had found sufficient resources to make six changes, their FA Cup heroics against Manchester City having weighed heavily on already-stretched legs. At Wembley, Arsenal had willingly surrendered more than two-thirds of the possession; against Villa no such drastic measures ought to be necessary and they promptly began on the front foot, switching the ball to their wing backs with purpose only to be let down by a combination of inadequate delivery and, particularly on the part of Ezri Konsa, alert defending.

Before the half-hour, though, Villa had made the breakthrough. They had not threatened much in the early stages, a harmless looping header from John McGinn aside, and seemed caught between poles now that their plight was not one of sheer desperation. There appeared a danger the game might pass them by but then Trezeguet provided an emphatic reminder of their threat.

If the goal’s conception was orthodox, its execution was masterful. Conor Hourihane’s delivery has been Villa’s primary source of chances in recent weeks and now the Ireland international was at it again with a left-footed corner towards the onrushing Tyrone Mings, who could not make proper contact but may have got the slightest of touches.

Either way, the ball reached an unattended Trezeguet a few yards inside the right corner of the box and his half-volley, sliced viciously inside Emiliano Martínez’s near post, was unstoppable. Trezeguet had scored twice in Villa’s previous home game, a 2-0 win over Crystal Palace. The winger has been a mercurial customer throughout his career but appears to have picked a handy time to develop a ruthless streak.

Moments before his flash of the right boot another Egypt international, the right back Ahmed Elmohamady, had been replaced by Frédéric Guilbert due to a hamstring injury. But Arsenal, for all their intent, showed little sign of capitalising on any defensive disarray before half-time.

A Dani Ceballos shot, skied over from 20 yards after a clever free-kick from Cédric Soares, was all that resembled an opening and, with Villa newly buoyant, their problems could have worsened. Trezeguet headed too close to Martínez when seeking another double and then Jack Grealish, previously quiet, cut in from the left to fade a dipping effort inches wide of the far upright.

It came as no surprise to see Granit Xhaka deployed for the second half in place of Lucas Torreira, who had looked lost and, as well as being booked, at one point incurred the visible frustration of David Luiz.

There was no immediate improvement, Villa instead forcing a succession of early corners, but Arsenal slowly began to awaken. Bukayo Saka has been supremely efficient all season so it was a surprise to see him spoon high over the bar after a cross from Soares. In fairness the ball had fallen on his weaker right foot; Pierre-Emerick Aubameyang soon experienced a similar issue when, spinning on to an Eddie Nketiah delivery and attempting a shot with his left, he allowed the excellent Konsa to block.

Guilbert saw a shot deflected wide at the other end before Arteta, clearly frustrated by Arsenal’s lack of incision, introduced Kieran Tierney and Nicolas Pépé. Now they were effectively operating with a four-man forward line but Villa had shown little sign of being exposed by the time mid-half drinks were taken.

Aston Villa could have sealed the win with 15 minutes left when Keinan Davis, who had just come on, was released sent clear after a sparkling run from Grealish. The striker dragged his shot wide and was made to sweat almost immediately when Nketiah headed against the inside of Pepe Reina’s post. But Villa rode out a wave of late pressure and this season’s great escape is now in sight. – Guardian

1 Filippo Giovagnoli soaks it all in as Dundalk march on to join the big fish
2 Dundalk in dreamland after hitting €3m Europa League jackpot
3 Dave Hannigan: How Christy Ring aroused the curiosity of American media
4 Arsenal reward for Anfield win is home quarter-final with Man City
5 Leo Cullen: ‘It feels like it all came crashing down on top of us’
Real news has value SUBSCRIBE